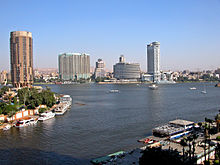 Eni estimates this deep-water deposit as the biggest find in the Mediterranean Sea. It may hold 30 trillion cubic feet of gas, equivalent to 5.5 billion barrels of oil, Bloomberg.com reports citing Eni Sunday statement.

“Egypt has still great potential,” Claudio Descalzi, the company’s chief executive officer, said in the statement. “This historic discovery” will transform the energy industry in Egypt, he said. Eni will start drilling more wells and installing pipelines next year and may see the first “fruits” of the project in about 2018, Descalzi said in an interview with Italian daily La Repubblica Monday.

Part of the output from the Egyptian field could be shipped to Italy or other destinations as liquefied natural gas, Descalzi said in the interview with La Repubblica. Eni is a partner in a plant at Damietta on the Mediterranean coast that chills gas until it transforms into a liquid so that it can be loaded on vessels and transported to buyers not connected by pipelines. The facility hasn’t been operating for lack of gas, Descalzi said.

This discovery will let Egypt to make their energy policy less dependent on imports provided by Persian Gulf states.

It should be recalled that Gazprom loses its leverage in Europe with the gas and oil prices decline.