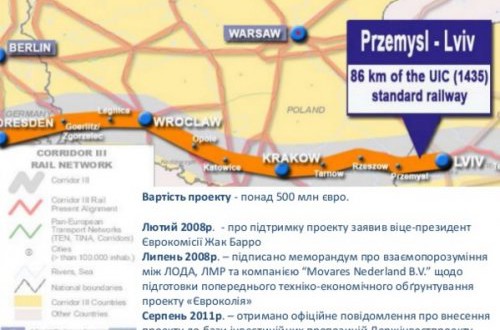 Ukraine will construct the narrower railway according to the European standard (1435 mm wide). This project was planned in Ukraine since the 1990s. But after signing the Association Agreement with the EU, it moved to the implementation phase. The project suggested that the new track must pass from Polish and Romanian border through Lviv and Chernivtsi. Its total length will be 476 km, Joinfo.ua reports with the reference to Zaxid.net.

The first stage of the project will include 75 km of the railway from the border of Poland to Mostyska town. Preliminary the project was estimated in €500 million.

It should be recalled that today Brussels was the last of 28 countries to ratify the EU-Ukraine Association Agreement.