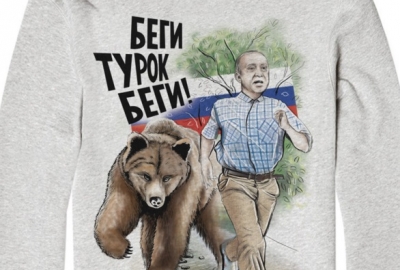 Russian fashion designers complain that they fail to meet deadlines of the production of anti-Turkey T-shirts because of delays of Turkish fabric supply.

So, a fashion designer Katerina Dobryakova complained that the production of anti-Turkey clothes was delayed because of disruptions in the supply of Turkish fabric. According to her, trucks with fabric have been bogged down by the border guards, Joinfo.ua reports.

“When the trucks arrive we will release a collection of clothes with anti-Turkish themes. At the moment, the producers are in panic because the trucks with fabric can’t cross the border, “- said Dobryakova.

A designer Alexander Konasov has similar problems. He also expresses a regret that Turkey is a monopolist on the market of fabric in Russia, and now the release of T-shirts with anti-Turkish slogans are delayed due to delays of the supply from Turkey.

However, the designer hopes that the shirts will be produced from the Russian fabric due to the lack of Turkish.

“We will have a few prints with tomatoes images, and with the words “I’m not going”, and the like”, – told.

Konasov  published “creative” prints on his website. In particular, it contains images “We do not need the Turkish coast, as Crimea and snowy Sochi are now with us. Our beloved, native country!”, and “Run, Turks, Run” (depicting Turkish President Recep Tayyip Erdogan running away from a bear).

It should be recalled that Moscow introduced economic restrictions against Turkey after Turkish Air Forces shot down a Russian Su-24.