Shares
At a joint press conference following the meeting in Kyiv, Ukrainian and Turkish Prime Ministers announced resumption of talks on a free trade zone between the two countries 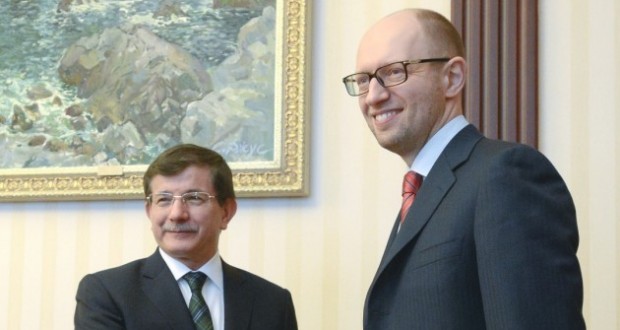 Prime Minister of Ukraine Arseniy Yatsenyuk and his Turkish counterpart Ahmet Davutoglu announced today the resumption of talks on a free trade zone between the two countries. This was announced at a joint press conference in Kyiv on February 15, Joinfo.ua reports.
“Negotiations on a free trade zone between Ukraine and Turkey has been suspended in 2013. Together, we give instructions to our ministries to start technical consultations on the resumption of the negotiation process for the establishment of a free trade area that will continue in March,” – said Yatsenyuk.
Ukrainian PM also suggested that Turkey will continue to invest in the Ukrainian infrastructure. Arseniy Yatsenyuk also noted that this is the first winter without Russian gas, which Ukraine successfully survived.
In turn, Davutoglu said that Turkey do not recognize the annexation of Crimea and promised to support Ukraine as a strategic partner.
It should be recalled that earlier today the governments of Ukraine and Turkey signed an agreement on a $50 mln loan to Ukraine to fill general fund of the state budget.
Turkey will also provide Ukraine with a mobile field hospital.