Shares
A Russian jewelry company Caviar’s released a golden iPhone, marking the second anniversary of the illegal seizure of Crimea from Ukraine 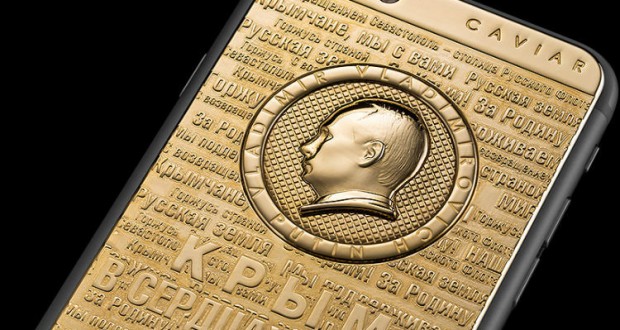 On Supremo Putin Crimea Gold Edition, trimmed in gold, shows the profile of Russian President Vladimir Putin, the phrase “Crimea in the hearts of men” and Patriotic slogans like: “the Crimea in the hearts of the people”, “For Crimea! For The Motherland!”, “Crimea, we are with you” and others, Joinfo.ua reports with reference to Appleapple.com.

The model became part of Supremo collection. The manufacturer offered a version with 64 and 128 GB of internal memory is priced between 199 000 and 209 000 respectively.

In March 2014, Crimea held a referendum, after which the Peninsula became part of Russia. Ukraine and many Western countries have called the referendum illegal, the accusations Moscow has repeatedly denied.

In October 2015 Caviar has made an iPhone 6S with the portrait of Vladimir Putin for $3,200 to celebrate the Russian President’s birthday.