Shares
On April 6 the Embassy of Sweden in Ukraine and Business Sweden conducted the first Swedish-Ukrainian IT-Connection forum in Kyiv. 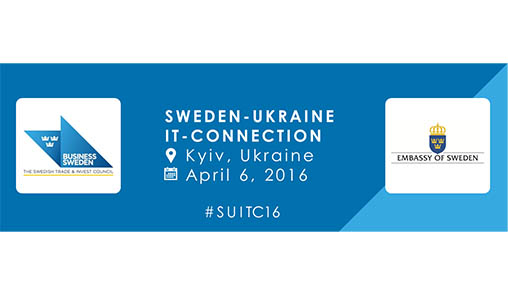 The Forum was attended by high government officials and leading IT companies from both countries, including 15 Swedish companies that presented their innovative solutions. 12 Swedish and Ukrainian start-ups got a chance to present their projects at the international level.

In his introductory remarks the Ambassador of Sweden Andreas von Beckerath stated that in 2015 the trade between Sweden and Ukraine increased by 20 percent, in particular due to cooperation in the IT sector. Sweden, one of the most innovative nations in the world, and Ukraine with its 90 thousand IT professionals, have tremendous potential to develop even closer IT links.

After an introduction by Daniel Larsson, Country Manager of Business Sweden in Kyiv, Swedish State Secretary to the Minister for Enterprise and Innovations Oscar Stenström emphasized in his opening speech: “Stockholm is second only to Silicon Valley in the number of successful start-ups per capita. This success should be further expanded through partnerships with Ukrainian counterparts.”

In her keynote speech Lisa Lindström, CEO of Doberman shared her experience of expanding to the US market. Major Swedish companies also described their latest innovations, including representative of Ericsson Mario Agati, CEO of Sigma Technology Carl Vikingsson and Founder of Yell Mathias Eklöf.

An important part of the Forum was the Start-up Alley, during which 12 start-up companies from Sweden and Ukraine made their presentations. Forum participants also had a possibility to visit the companies’ stands and talk to the CEOs and inventors.

Migration Section of the Embassy also presented its services for the Ukrainians who are coming to Sweden and opportunities to study in Swedish universities.