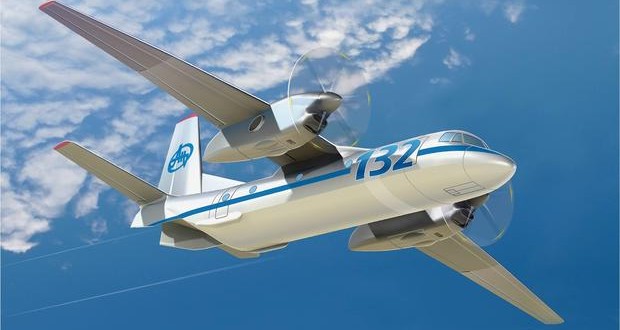 Through a memorandum of understanding (MOU) signed at the Farnborough Airshow, Pratt & Whitney Canada (Outdoor Exhibit 3) will provide Antonov’s An-132 production program with a new version of the PW150A turboprop engine. The An-132 will be developed by Antonov (Ukrainian Pavilion) and the King Abdulaziz City for Science and Technology in Riyadh, Saudi Arabia, Joinfo.ua reports with reference to AINonline.com.

The An-132 is intended for short- and medium-haul routes. It can transport troops and cargo and be outfitted with a variety of cabin configurations. Once it is produced, the aircraft will have a cruising speed of 500 kilometers per hour (270 knots) and a maximum cruising altitude of 9,000 meters (29,500 feet) with a maximum payload of 9.2 metric tons (20,282 pounds).

John Saabas, president of Pratt & Whitney Canada, said, “We are delighted to be working with Antonov on its An-132 production program after having providing Antonov with PW150A engines for the An-132D Demo aircraft last fall. The PW150 delivers unequalled value to multi-purpose aircraft such as the An-132, offering exceptional payload capacity, fuel efficiency, environmental performance and low-cost maintenance.”

It shoulde be recalled that on 12 July, Antonov design bureau (part of the Ukrainian state-owned concern Ukroboronprom) signed a contract with Canadian Esterline CMC Electronics (CMC) on supply of cockpit avionics.