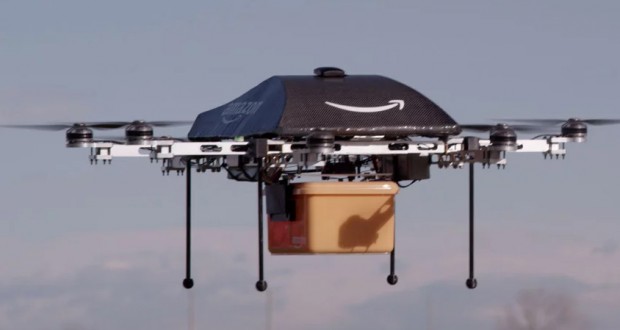 “I just unearthed the Death Star of #ecommerce via @cbinsights… AMZN patent for airborne warehouses at 45K ft spitting out delivery drones,” she wrote on Twitter. The airborne fulfillment centers, or AFCs, would be stocked with a certain amount of inventory and positioned near a location where Amazon predicts demand for certain items will soon spike.

Drones, including temperature-controlled models ideally suited for food delivery, could be stocked at the AFCs and sent down to make a precise, safe scheduled or on-demand delivery.

An example cited in the filing was around a sporting event. If there’s a big championship game down below, Amazon AFC’s above could be loaded with snacks and souvenirs sports fans crave.

The AFCs could be flown close to a stadium to deliver audio or outdoor display advertising near the main event, as well, the filing suggested.

The patent reflects a complex network of systems to facilitate delivery by air.

Besides the airborne fulfillment centers and affiliated drones, the company has envisioned larger shuttles that could carry people, supplies and drones to the AFCs or back to the ground.

Using a larger shuttle to bring drones up to the AFC would allow Amazon to reserve their drones’ power for making deliveries only.

Of course, all these elements would be connected to inventory management systems, and other software and remote computing resources managed by people in the air or on the ground.

The filing also reveals that the shuttles and drones, as they fly deliveries around, could function in a mesh network, relaying data to each other about weather, wind speed and routing, for example, or beaming e-book content down to readers on the ground.

It should be recalled that in November, Domino’s Pizza made the world’s first drone delivery in New Zealand.