Shares
After a factory in Dongguan, China, replaced most of its workers with robots, it witnessed a spectacular rise in productivity: production rises by 250%, defects drop by 80% 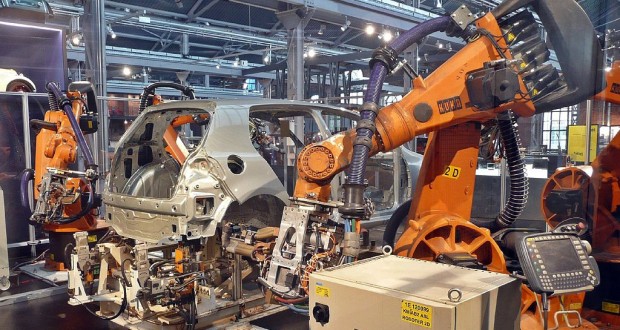 It’s been long discussed that robots and computers will start taking our jobs “in the near future” — well that near future is upon us and we’re not really prepared to deal with it.

The Changying Precision Technology Company focuses on the production of mobile phones and uses automated production lines. The factory used to be run by 650 employees, but now just 60 people get the entire job done, while robots take care of the rest, Joinfo.com reports with reference to ZME Science.

Luo Weiqiang, the general manager, says the number of required employees will drop to 20 at one point. Despite this reduction in staff, not only is the factory producing more equipment (a 250% increase), but it’s also ensuring better quality.

Without a doubt, this is something we’ll be hearing more and more of in the future.

Adidas is one of the companies which has already announced a shift towards robot-only factories, and it’s not just factories that will eliminate workers for robots.

Yeah, that’s a long list, and it goes on for much longer. Whether we admit it or not, we’re stepping well into the bounds of “robots taking over our jobs.”

This is exciting indeed. We’re entering a new age of automation, and technology is truly reaching impressive peaks. The process is better and it’s also more resource efficient, which is also good.

It’s also good that humans don’t have to work repetitive, unchallenging jobs and can instead focus on other things. The problem is … there might not be other things. In fact, there most definitely aren’t.

Those people are out of a job, and there’s a good chance they’ll have a very difficult time finding new jobs. Simply put, our society isn’t prepared to integrate these people into different jobs and naturally, this will cause huge problems.