Shares
Here are the 10 Super Bowl 2017 ads you need to watch, according to Time magazine ... and Melissa McCarthy 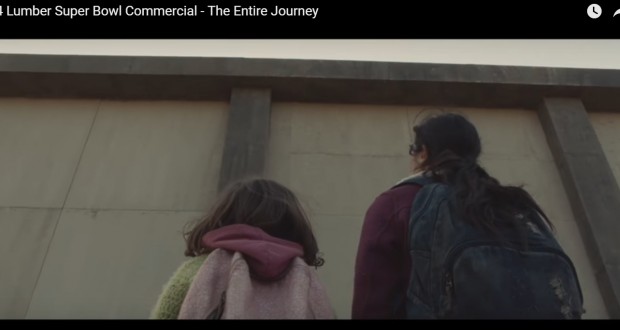 The One Everybody’s Talking About

Building supplies company 84 Lumber ran what will undoubtedly be the most controversial ad of the Super Bowl, showing a Spanish-speaking mother and daughter traveling from Mexico into the United States. The shorter broadcast version doesn’t appear to have any specific message about immigration, legal or otherwise, Time magazine reports.

But the full version, embedded below, ends with a declarative statement: “The will to succeed is always welcome here.”

The Other One That Everybody’s Talking About

The One That’s the Funniest

Skittles continued its longstanding tradition of absurdist humor with “Romance.” But I have a question: why’s that kid wasting all his skittles?

Nintendo’s ad for its upcoming Switch console — particularly the “extended cut” here — makes the case that it’s a take-everywhere, play-anywhere system with multigenerational appeal. We’ll see if it can reverse Nintendo’s fortunes in the consoles department when it’s released March 3.

The One That’s Different Now

Internet domain registrar GoDaddy was once famous (infamous?) for its Super Bowl spots. This year’s ad goes in a completely different direction — and nails it.

The One That Looks Into the Future

Facing an uncertain future in the age of driverless cars, automakers have been scrambling to recast themselves as “mobility companies,” offering everything and anything that gets you from A to B. Ford’s Super Bowl spot manages to earn a belly laugh as well as showcase the company’s new vision for the future of transportation.

The One That’s Directly Addressing a Controversy

Home rental site Airbnb’s ad, “We Accept,” is a response to critics who say the company hasn’t done enough to prevent discriminatory behavior by hosts. The company has gone beyond marketing in addressing those grievances; it also recently rolled out new policies designed to reduce racism on the platform.

The One With a Social Message We Didn’t Expect

When you think “gender equality,” you probably don’t think Audi. But you will after watching the automaker’s soapbox racer spot above.

Women are still paid 21% less than men. As a brand that believes in progress, we are committed to equal pay for equal work. #DriveProgress pic.twitter.com/bmQKrNr9l4

The One That’s Just Really Weird

Guacamole is delicious, yes. But why is this secret society eating avocados? And more importantly, when will they detach the of shame, and attach the stone of triumph?