Shares
Gesture controls have been big in video games like Wii Sports for a while, and now they’re coming to toys. 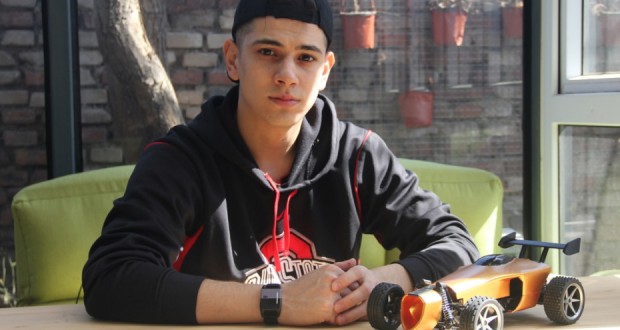 Williamsburg, Virginia-based Ultigesture is launching a Kickstarter crowdfunding campaign today for its smart toy cars that you can control with gestures. All you do is put on the wristband and make gestures with your arm to guide the remote-controlled car, Joinfo.com reports with reference to VentureBeat.

The car recognizes a range of easy gestures. You can get it to move in all directions, speed up, slow down, and stop.

The driver has a much more natural and connected driving experience than typical RC cars, and there’s no bulky controller to carry around. The gesture-controlled car and wristband are now available for pre-sale through Ultigesture’s Kickstarter campaign for $89 (for early birds).

The toy car connects by low-power Bluetooth to the slick wristband. When you move your forearm up, the car goes forward; forearm down makes the car go backward. A slight clockwise turn makes the car go right, and counterclockwise makes it turn left.

“There are plenty of remote-controlled toy cars which are fun to play, but we have discovered that wearing the wristband and using gestures makes for a much more realistic racing experience,” said Gang Zhou, CEO of Ultigesture, in a statement. “The user experience is really improved by literally putting your body — or at least your arm — into the driving. It is very exciting to feel like you are connected to this small toy car as it goes racing down the street.”

To interpret the gestures and communicate with the car, the Ultigesture team of computer scientists and engineers created the unique, sensor-packed wristband. The band contains three essential sensors to help control the car: accelerometer (motion sensor to recognize the range of movement and control speed of car), gyroscope (to detect the angle of the forearm), and magnetometer (to determine orientation and compass).

In addition, the wristband includes a microcontroller with machine learning code so the car can understand what you want to do. LED lights on the outside window provide notifications regarding battery and power status.

The car can drive at speeds up to 13 miles per hour, and it weighs 17 ounces. The battery lasts about 30 minutes during play.

“We want to make remote control racing cars that are really cool and intuitive. With the wristband and gestures, it is amazing how much closer you feel to the car — especially when you compare it with using a remote controller,” said Zhou.

Ultigesture has five cofounders, and it was started in August 2015. The company has licensed technology from the College of William and Mary.