Shares
Tesco has apologised for any offence from a beer advertisement that claimed "Good Friday just got better". 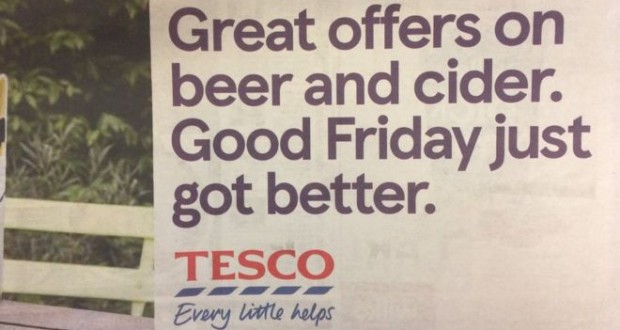 The ad ran in some newspapers to promote “great offers on beer and cider” in the run-up to Easter. The supermarket said it would not run the ad again after it attracted criticism from some religious figures, Joinfo.com reports with reference to the BBC.

Vicar and broadcaster, the Reverend Richard Coles, said the advert was “extraordinarily and unnecessarily ignorant”.

Good Friday is when Christians commemorate the crucifixion of Jesus Christ. Some choose to mark the day by fasting, which can include abstaining from eating meat or drinking alcohol.

There is some dispute about why it is called “good”, with some suggesting the day is “good” in that it is holy, and others that the phrase is a corruption of “God’s Friday”.

A Tesco spokesperson told the BBC: “We know that Easter is an important time of the year for our customers.

“It is never our intention to offend and we are sorry if any has been caused by this advert.”

Tesco “got it badly wrong” with the “crass” advert, Michael Wakelin, from the faculty of divinity at Cambridge University, told BBC 5 live Daily.

It was also a “decidedly poor way of treating such a holy day”, said Mr Wakelin, a former head of BBC religious programmes.

“I’m sure there was no attempt to offend, I’m sure that wasn’t in their mind.

“It is just religious illiteracy; ignorance if you like, around what religious people hold dear, and that is my main concern,” he added.

Rev Coles said on Twitter that the advert “causes unnecessary offence to many. It didn’t need to.”

However, other Twitter users felt the advert was not offensive.

“Like it or not the Easter is also a secular holiday as well as a religious one. Most are travelling to families rather than to church,” one user wrote.

It comes after Cadbury and the National Trust were criticised for apparently dropping the word Easter from their egg hunts.