Shares
The Ministry of Digital Transformation of Ukraine announced its plans to run public registers on blockchain. Vice Prime Minister Mykhailo Fedorov also described legalization of bitcoin and cryptoassets as one of the top priorities of the Ministry. 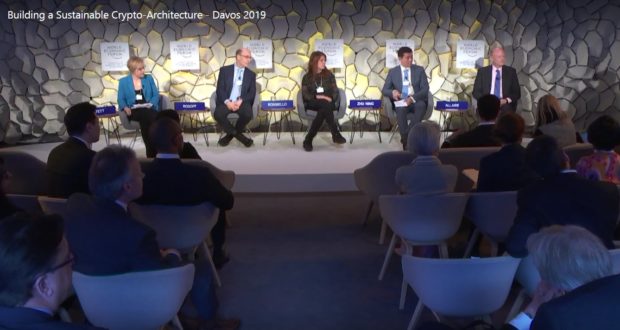 Ukraine’s blockchain plans seem to follow the recommendations of Davos World Economic Forum 2019. Digital revolution and Globalization 4.0 were the central topics of WEF 2019. Vakarin summarized its outcomes in the area of blockchain at Davos Ukraine Digital Transformation panel. The discussion of cryptocurrencies in Davos focused on risks of centralized and decentralized currencies and the extent of government involvement.

A parallel event, Blockchain Economic Forum emergence of a blockchain central bank for developing countries and a potential structural change in capital markets. Ukraine House Davos has increased its presence at WEF since 2018.

During a discussion on The role of Blockchain To Build Public Trust in Government organized in Kyiv before Davos by Professional Government Association of Ukraine and NEM, Sergei Vakarin provided examples of blockchain projects of state institutions in Ukraine. They include State Cadastre, Register of Property Rights and Kyiv Smart City. Vakarin also mentioned the electronic voting project in Switzerland, where a NEM-based solution is expected to be applied.

Sergei Vakarin cooperates with blockchain industry of Ukraine and Switzerland. His research into investment and governance was used by governments of Ukraine and Belarus to build national investment strategies that resulted in IT boom in both countries.

Blockchain Hub Kyiv was established in the spring 2018 to support innovative projects and ideas based on blockchain technology and cryptocurrency eco-system. In partnership with Start Now School and NEM Ukraine’s Anton Bosenko, Sergei Vakarin organized a visit to the Blockchain Hub Kyiv for a group of students.

In Zug, Switzerland Ralf Glabischnig and his company Inacta launched the Crypto Valley Labs with the purpose to create an ecosystem of blockchain startups. Ralf Glabischnig visited Ukraine and met with Sergei Vakarin to discuss cooperation. Sergei Vakarin also participated in discussion on blockchain at the Swiss Payment Forum and other events in Zurich. A hub called Trust Square opened in Zurich in the spring 2018 to bring together entrepreneurs, businesses, investors as well as academics and researchers in different fields of blockchain.

In January 2018 Sergei Vakarin published an article called “2017 was the year of bitcoin. 2018 will be the year of blockchain and smart contracts”, and this forecast proves correct.