NASA: Pluto has blue skies and water ice on its surface

Shares
NASA reported, that the first color images of Pluto from New Horizons spacecraft show that it has blue skies and water ice on its surface 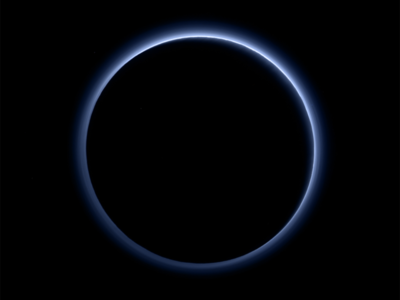 As New Horizons spacecraft gets closer to Pluto, the dwarf planet becomes bigger, revealing its secrets. Now the spacecraft is 3.1 billion miles (5 billion kilometers) from Earth, all systems operating normally

Last week NASA has received the first color images of Pluto’s atmospheric hazes from New Horizons spacecraft. It became a complete surprise the scientists that the hazes were blue.

The haze consists of small particles, called tholins, which are the results of sunlight-initiated chemical reactions of nitrogen and methane. The particles themselves are likely gray or red, but the way they scatter blue light has gotten the attention of the New Horizons science team. “A blue sky often results from scattering of sunlight by very small particles. On Earth, those particles are very tiny nitrogen molecules. On Pluto they appear to be larger — but still relatively small — soot-like particles we call tholins, ” – said science team researcher Carly Howett.

The pictures were processed with a softwear, that combines information from blue, red and near-infrared images. The received pictures show that, if seen through human eye, the skies on Pluto would be blue.

“Large expanses of Pluto don’t show exposed water ice,” said science team member Jason Cook, “because it’s apparently masked by other, more volatile ices across most of the planet. Understanding why water appears exactly where it does, and not in other places, is a challenge that we are digging into.”

A curious aspect of the detection is that the areas showing the most obvious water ice spectral signatures correspond to areas that are bright red in recently released color images. “I’m surprised that this water ice is so red,” says Silvia Protopapa, a science team member from the University of Maryland, College Park. “We don’t yet understand the relationship between water ice and the reddish tholin colorants on Pluto’s surface.”