The first on Earth monument to Darth Vader 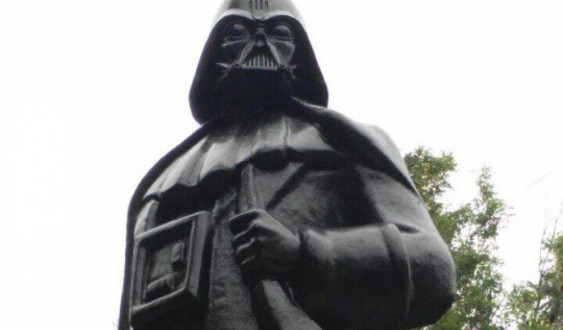 In Odesa near the entrance to the factory Presmash a local well-known artist Alexander Milov created a monument to Darth Vader. And it even has a wi-fi access point, Joinfo.ua reports with the reference to Dumskaya. This was originally a monument to Vladimir Lenin, the leader of Bolsheviks. According to Ukrainian law on de-communization, this monument was appointed to be demolished. But now it is saved.

At the request of the people, who work on Presmash and the local community, the artist has repurposed the monument.

“Everything flows, everything changes, the old characters give way to the new ones, and so the world turns,” – the factory manager commented on the event.

The author hopes that the monument to the Dark Lord will become q new landmark of Ukraine. And by the way, the statue has a wi-fi access point, it’s embeded in the Vader’s head.

This is how the monument looked before: