Hayden Panettiere will have c-section

Shares
Hayden Panettiere needs to have a c-section because the bride of the Ukrainian boxer will have a real giant. 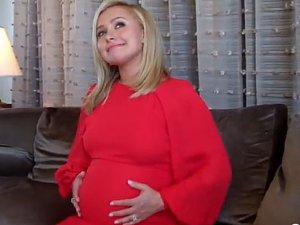 Hayden Panettiere and Wladimir Klitschko are preparing to become parents. As it turned out, the Ukrainian boxer will become the father of a "giant" since little Hayden simply can not give birth to her child on her own. Most likely, she will have a cesarean section.

During the period of pregnancy Hayden has gained almost half of her weight and now her scales show 66 kilograms. The actress said that the wedding would not happen as long as she gets in her former shape.

But close friends of the couple say that they are fine, they adore each other. Despite the rumors that have previously appeared in the media, they're still planning their wedding. Hayden's pregnancy only improved their already warm relationships.

Earlier, the Ukrainian champion Wladimir Klitschko and American actress Hayden Panettiere repeatedly postponed the wedding for different reasons. In the first place, because of volatile and tragic situation in the homeland of Wladimir. He has always supported Ukraine and acutely experienced everything that has happened in his homeland for the last year.

Hayden supports her fiancé. She repeatedly came to Kiev, went with Wladimir and his brother, mayor of Kyiv Vitali on Maidan.