Shares
Milla Jovovich once again published some photos of her pregnant belly. In homelike images the star seems to feel good. 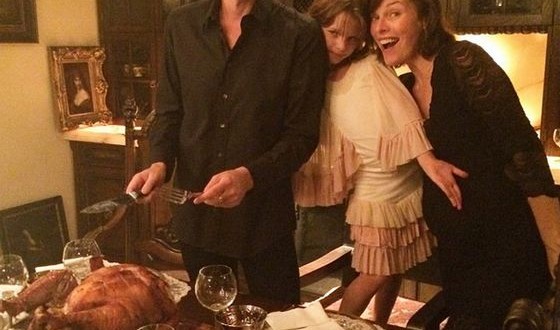 Recently, Milla Jovovich has pleased her fans with the news that soon she would have another long-awaited girl.

Now the Hollywood star's pregnancy is coming to the finish line, but still she is in a great shape and the photos published in the social network, show that she feels good.

In the pictures the star with Ukrainian roots is in a beautiful form-fitting dress with her daughter and beloved man. On the table the couple had a huge mouthwatering turkey, as the family was celebrating Thanksgiving. It is to be noted that the Hollywood actress often shares her home photos with her fans on social networks, and they are very grateful for it.

Earlier, in her Twitter Mila wrote that her little daughter decided to go into business. Ever decided to sell lemonade and was very happy about her new business idea. Her mother supports her little girl.

It is to be recalled that recently pop star Christine Aguilera became a mother. Being pregnant, she did not keep a strict diet, as she believes that the health of the baby is much more important that the mother's shape.

However, for a very short period of time she was able to lose 21 kilograms with the help of a personal trainer, yoga classes and a special diet.