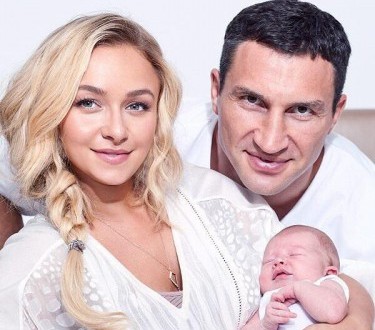 The picture was published on Klitschko brothers" website in the social network. The first photo taken after the long-awaited and important event demonstrates happy and smiling parents with their tiny daughter Kaya Evdokia.

The funny comment under the photo reads, "Ladies and gentlemen … And now meet for the first time Kaya Evdokia Klitschko!"

Ukrainian media have already noted that, apparently, the star couple gave the right of the first photoshoot to the photographer from the American publication People.

It was noted earlier that the young mother, actress Hayden Panettiere, told about her experience and feelings after the delivery. The Hollywood beauty admits that she feels differently, and it is quite difficult to get used to the metamorphosis that had happened to her.

The girl said that she was concerned about the changes of her body. Hayden noted with some regret, "Please tell me that this is temporary".

In addition, the American candidly told that so far she feels like 80-year-old woman trying to go down the stairs.