Angelina Jolie presents her movie in Vatican and meets Pope

Shares
Angelina Jolie arrived with her children in Rome to officially present her biopic Unbroken and personally meet with Pope Francis. 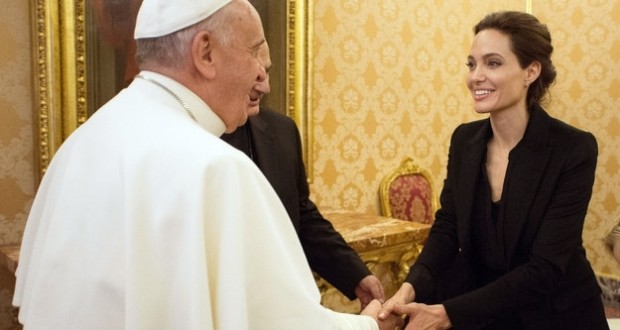 Yesterday, Angelina Jolie, accompanied by her two daughters Shiloh and Zahara arrived in Rome. The insiders claimed that the actress was preparing for a meeting with the head of the Vatican. These rumors were not unfounded.

It turned out that in Vatican City Angelina Jolie personally presented Unbroken, her cinematic tale of human courage and defiance, will power and thirst for life. Pope Francis enjoyed the story of Louis Zamperini, captured by the Japanese. However, the pontiff did not attend the premiere, but he arranged an audience for Angelina and her two children in the Apostolic Palace.

After this meeting, actress Angelina Jolie told reporters that the invitation to demonstrate the biopic would have been a great honor for Louis, since he was a man of faith and an example of power of the human spirit. The Pope also presented the actress his rosary.

It is to be recalled that Louis Zamperini died last summer at the age of 97. Pneumonia he had fought more than a month took the life of the athlete.

By the way, in Japan Angelina's movie was received without enthusiasm. Moreover, local nationalists consider the movie as "racist" and even demand to make an actress and director persona non grata. She was accused of twisting the facts and unreliability of the plot.