Shares
Russia's aggression, desire to conquest new territories, 'Russian World' is a kind of constant, which has excited the minds of people for centuries. But, the popular British band sang about it 22 years ago. 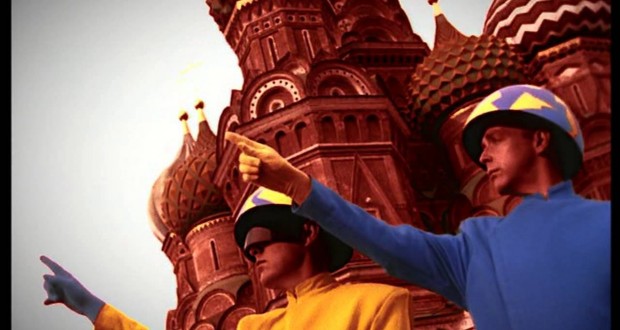 Back in 1993, Pet Shop Boys sang a song about the Russian aggression, ironically praising the Soviet Union. In addition, in the video clip the musicians used yellow and blue colors. This historical analogy was noticed by journalist and MP Mustafa Nayyem. He wrote about it on his Facebook.

The song "Go West" belongs to the American band and was sung for the first time in 1979, but it gained popularity because of the British, who breathed new life into it. In addition, the band added one verse and the beginning of the song sounds like the anthem of the Soviet Union (and respectively, Russia).

The band filmed the video clip to the song at the Gagarin Square, in the Museum of Space, and at the Red Square. Chris Lowe and Neil Tennant (band's soloists) are dressed in yellow and blue overalls with head covered with blue and yellow helmets.

In general, the lyrics do not consist of specific slogans and appeals, but the refrain states the idea that it is better to live in the West, where life is more free and happy.

In particular, one of the verses sings that "there are many ways to live there in the sun or shade, together we will find a place to settle where there's so much space, without rush and the pace back East, the hustling rustling just to feed."