Home / Entertainment / UFO spotted in the streets of Brussels

UFO spotted in the streets of Brussels 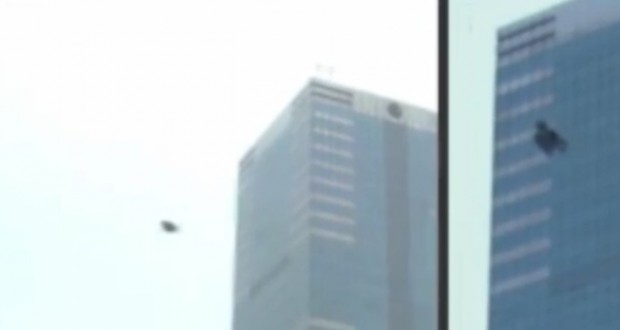 Recently, new video of UFO spotted in Brussels was published on web. The strange object provoked  a lot of controversy among the viewers, Joinfo.ua reports with the reference to Mirror.

In this video an object is soaring high among the buildings, drastically changing the trajectory and speed. Internet users have put forward different versions of what is captured on video. Some say that it is a ship or a probe aliens, others – that this drone, others believe that this is just a raised air flow plastic bag.

Eventually, the Mirror sais, the radio station Pure FM RTBF put thousands of viewers out of their misery by revealing that the drone had actually been commissioned to promote Tom Cruise’s film Oblivion, first released in 2013.

About a month ago an UFO was filmed near the Russian border over the Baltic Sea. On the video you can see a cluster of three orange objects hovering in the air.

In early September in Bangkok, about nine in the morning local time, people were able to see a fireball flying to the ground at a very high speed, leaving a line of white smoke behind it. Affected people were in shock and on the Internet appeared several videos where the authors note that it might be a meteorite that flew over Bangkok. The management of the Civil Aviation of Thailand reports that no incident at this time was observed. Experts believe that the fireball could be just some space junk.