South Korea Is Building a Monument to Gangnam Style 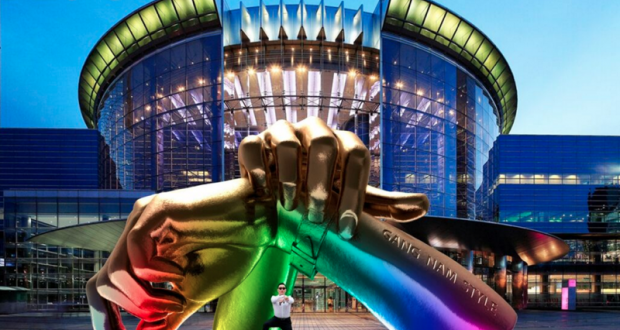 The Seoul district of Gangnam has announced a proposal to build a huge bronze sculpture of the really popular dance Gangnam Style. It really is the most watched video on YouTube – 2.4 billion views, Joinfo.ua reports citing Kotaku.com.

The metal sculpture will show two fists overlapped in the style of the song’s “horse-riding” dance move. The Korean media reported that the district set a budget of 418,320,000 won (US$366,301).

The statue, measuring 17 feet by 27 feet, will be located in Gangnam , of course, in front of the COEX Center, where part of the video was apparently filmed. You can see a mock-up of the statue on the photo. The inclusion of PSY is in case you don’t know what it is all about.

Gangnam district authority hope to install the sculpture as early as December.

Gangnam tourism director Park Hee-Soo said he hoped the statue would “become a landmark for our district”.

“Tourists can take pictures under the statue and the song will play automatically when you stand there,” he added.