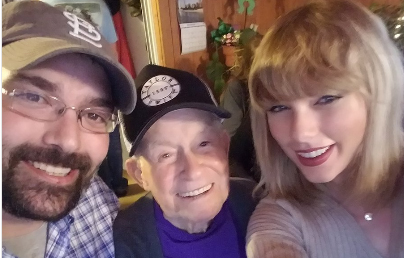 Cyrus Porter, 96, said in an interview with his local TV news station in New Madrid, Missouri, that he is a great fan of Taylor Swift and her music. Porter is also a World War II vet, which apparently doesn’t stop him from rocking out to a sick beat. He’s even been to two Swift concerts, according to Mashable.

As he told the news station, “She puts on a show no one else puts on.” Swift popped by Porter’s Christmas celebration with his extended family. She talked with the beyond-surprised family members, looked at war memorabilia with Porter, took tons of photos and even sang an acoustic living room rendition of her hit tune, “Shake it Off.” Of course, the whole family sang and danced along, including Porter.