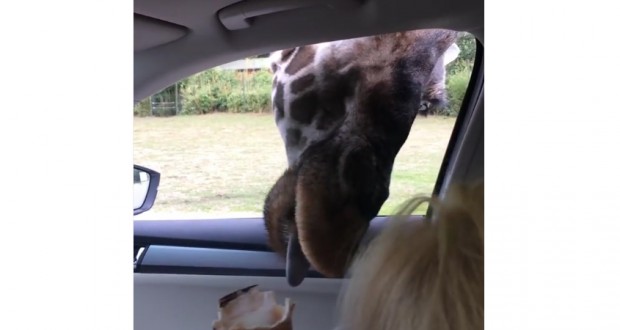 Torsten Stroebl posted a video to Instagram showing the giraffe putting its head inside his family’s vehicle at the Serengeti Park in Hodenhagen, Joinfo.com reports with reference to UPI.

Stroebl said the windows of the vehicle were open so the giraffe apparently took the open windows as an invitation.

The video shows the giraffe swiftly stealing the top of the ice cream cone being held by Stroebl’s wife, Melanie, and attempting to grab the rest of the cone with its tongue.

Melanie tried to save the ice cream first, but then she feeds it to the giraffe by breaking off pieces of the cone.

It should be recalled that a baby giraffe made his first public appearance in Amsterdam zoo in November.