Shares
Kim Kardashian and Kendall Jenner walked a familiar red carpet in New York on Monday night but their appearance was definitely a first. 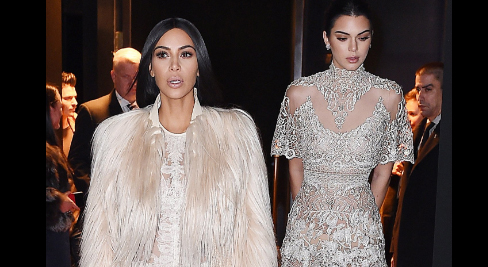 The famous sisters have signed up to a cameo role in “Oceans Eight” and put on their best dresses to film scenes at a fake Met Gala for the franchise, Joinfo.com reports with reference to PageSix.

The sisters will take part in Met Gala along with Katie Holmes, Adriana Lima and Vogue boss – and Gala organizer – Anna Wintour.

The mom-of-two used nude underwear and the dress’ careful lace pattern to cover her modesty.

She kept out the chill of the New York evening with a faux fur jacket which gave her look an edge.

Supermodel Kendall meanwhile opted for a jaw-dropping haute couture gown from Elie Saab which was covered in an intricate lace pattern.

The dress went right up to neck and cinched her in at the waist before falling to the floor.

The 21-year-old opted for a natural look, with her hair pulled back from her face and minimal makeup.

1/16/17: Kendall and Kim Kardashian on their way to shoot a Met Gala scene for the Ocean’s 8 movie. pic.twitter.com/cdLTgIvFZS

Kim’s cameo in the film is a further sign she’s returned to full-time work following her terrifying ordeal in Paris at the hands of armed gunmen.

The 36-year-old traveled to Dubai for her first work commitment since October on January 13.