Shares
“This year it really kind of heats up,” Maisie Williams says, speaking about the coming season 7 of 'Game Of Thrones' 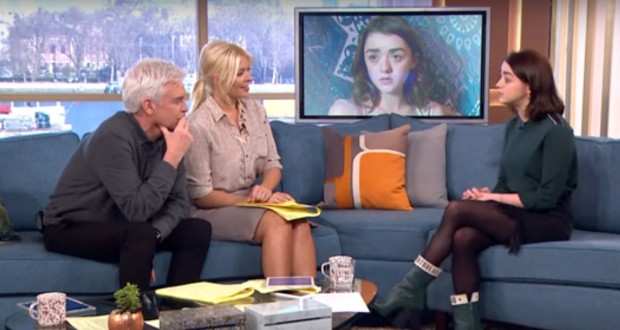 Arya Stark has a lot coming up for her in ‘Game of Thrones’ season 7, Joinfo.com reports with reference to Hollywood Life.

Maisie Williams revealed in a TV interview that things really heat up in the new season, and Arya will face some ‘high points’ and ‘low points.’

“This year it really kind of heats up,” Maisie Williams told ITV’s This Morning on Jan. 24. “Coming to the end of last season, the final episodes, it really just felt like we were setting up for the finale… Everyone gets their trials and everyone get theirs tribulations, which is excellent. Particularly for Arya, there’s some high points and there’s some real low points, too.”

Arya showed everyone in the season 6 finale that she’s still determined to carry out her kill list. She showed up at The Twins and slit Walder Frey’s throat after wearing a mask she stole from the Hall of Faces. There are a lot of people still on that list, like Cersei and The Mountain, and her thirst for vengeance could lead her to trouble.

We’re still hoping Arya will find her way back to Winterfell and reunite with Sansa and Jon Snow. Game of Thrones season 7 is currently finishing filming in Iceland, and the cast only has one more season until the show is over for good.

Maisie noted that it’s going to be tough to say goodbye to the show she’s been a part of for years. She’s grown up on the show!

“It’s really strange,” she said. “It’s exciting because there’s been so many things I haven’t been able to give my all because I’ve been such big part of Game of Thrones,” she said. “So it’s exciting thinking, ‘oh, I can do whatever I want with my career and I don’t have any ties.’ But it’s also really scary because that’s been my safety blanket.”