Home / Entertainment / SAG Awards 2017: The Best Speeches from the Ceremony

SAG Awards 2017: The Best Speeches from the Ceremony

Shares
At the 2017 SAG Awards on Sunday night, several winners used their acceptance speeches to denounce the policies of President Trump and to address the country’s deep divisions. 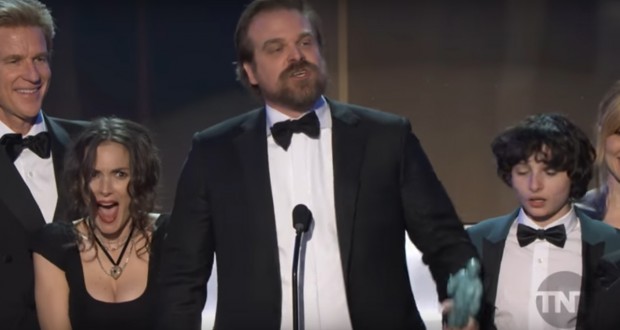 Here are excerpts from speeches by Julia Louis-Dreyfus, who took home an award for “Veep,” Mahershala Ali, who won for “Moonlight,” and David Harbour, a star of “Stranger Things,” which won the SAG equivalent of best TV drama, as New York Times reported.

Whether the Russians did or did not hack the voting of tonight’s SAG Awards, I look out on the million, or probably even a million and a half people in this room, and I say, this award is legitimate, and I won! I’m the winner, the winner is me — landslide!

… To a less insane note, I’d like to say that I am a very proud member of this union, and I’m thrilled to be here tonight, and I thank the Screen Actors Guild. I want you all to know that I am the daughter of an immigrant. My father fled religious persecution in Nazi-occupied France, and I’m an American patriot. And I love this country. And because I love this country, I am horrified by its blemishes. This immigrant ban is a blemish, and it is un-American.

… Our sister guild, the [Writers Guild], made a statement today that I would like to read because I am in complete agreeance with it. Our guilds are unions of storytellers who have always welcomed those from the nations and of varying beliefs who wish to share their creativity with America. We are grateful for them. We stand with them, and we will fight for them. Thank you very much.

… I would just like to say that in light of all that’s going on in the world today, it’s difficult to celebrate the already celebrated “Stranger Things.” But this award from you who take your craft seriously and earnestly believe, like me, that great acting can change the world. [It’s] a call to arms from our fellow craftsmen and women to go deeper and through our art to battle against fear, self-centeredness and exclusivity of our predominantly narcissistic culture, and through our craft to cultivate a more empathetic and understanding society by revealing intimate truths that serve as a forceful reminder to folks that when they feel broken and afraid and tired they are not alone.

We are united in that we are all human beings and we are all together on this horrible, painful, joyous, exciting and mysterious ride that is being alive. Now, as we act in the continuing narrative of “Stranger Things,” we 1983 Midwesterners will repel bullies, we will shelter freaks and outcasts, those who have no homes. We will get past the lies. We will hunt monsters. And when we are at a loss amidst the hypocrisy and the casual violence of certain individuals and institutions we will, as per Chief Jim Hopper, punch some people in the face when they seek to destroy the weak and the disenfranchised and the marginalized and we will do it with soul, with heart and with joy. We thank you for this responsibility. Thank you.

What I’ve learned from working on “Moonlight” is, we see what happens when you persecute people. They fold into themselves. And what I was so grateful about in having the opportunity to play Juan was, playing a gentleman who saw a young man folding into himself as a result of the persecution of his community, and taking that opportunity to uplift him and tell him that he mattered and that he was O.K. and accept him and, uh — I hope that we do a better job of that.

You know, when we kind of get caught up in the minutiae, the details that make us all different, I think there’s two ways of seeing that. There’s an opportunity to see the texture of that person, the characteristics that make them unique.

And then there’s an opportunity to go to war about it, and to say that that person is different than me, and I don’t like you, so let’s battle. My mother is an ordained minister. I’m a Muslim. She didn’t do back flips when I called her to tell her I converted 17 years ago. But I tell you now, we put things to the side, and I’m able to see her, she’s able to see me — we love each other, the love has grown, and that stuff in minutiae. It’s not that important.”