Shares
Even the most in-demand artists can suffer from technical issues, as Drake found out on Wednesday when Travis Scott managed to fall off stage during their set 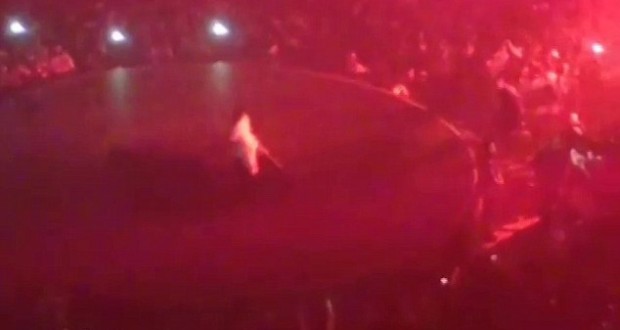 Performing alongside Drake, 29, at London’s O2 Arena, the 24-year-old rapper unexpectedly fell off stage into a pit – causing damage to the set, Daily Mail Online reports.

Taking to the stage full of energy and enthusiasm  started to perform Goosebumps alongside Drake.

As the song kicked off Travis could be seen striding out to the circular second stage, placed in the middle of the O2, as Drake followed from the main stage. But just as the two hip hop stars were getting into the first few seconds of the song, Travis disappeared down a hole. Having bounded out to the stage, which was still cloaked in a deep red light, it appears that the Antidote singer forgot about a huge hole in the stage – in which a prop was concealed.

Walking straight to the centre of the platform, Travis found there was no floor beneath his foot and he fell straight down the hole and out of sight.

Witnessing it all from mere meters away, Drake ran up to the edge of the pit and proceeded to help his friend out of the hole; while Travis was apparently unscathed, the same could not be said for the prop.

The singer and rapper apparently damaged a huge light-up globe which forms an integral part of the Canadian hit-maker’s stage show. As a result, Drake is said to have then told fans he was doing the show ‘for free tonight’, and that he’d ‘deal with it later’.

He made the offer after Travis fell and then repeated it at the end of the gig saying: ‘London England, I love you, I hope you enjoyed your free show.’

Fans seemed equally amused by it, with many thanking Travis for having his fall as it meant a free show.