Shares
Christine Baranski may have just given Saturday Night Live an offer it can’t refuse. 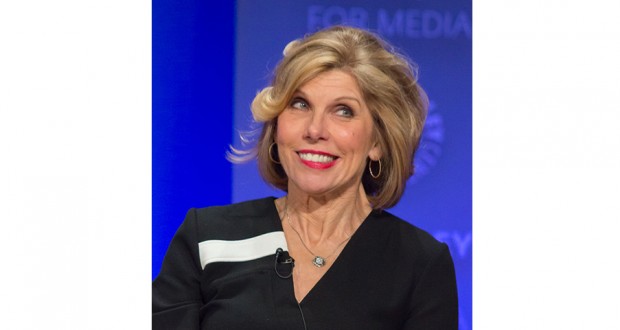 Coming off the excitement of last week’s surprise sketch featuring Melissa McCarthy as Sean Spicer and an offer from Rosie O’Donnell to take on Steve Bannon, The Good Fight star and Emmy winner is the latest actress to throw her hat—or in this case, her courtroom-ready designer blazer—into late-night’s metaphorical ring, Vanity Fair reports.

When asked Wednesday if she’d ever drop by S.N.L. to do a guest impression of somebody in Donald Trump’s inner circle, Christine Baranski noted her physical similarities to Betsy DeVos, the newly confirmed and much-maligned United States secretary of education.

“It would seem somewhat logical—we have that strong jawline, don’t we?” she mused, from the red-carpet premiere of her new legal series. In this case, however, the similarities end there. Baranski admittedly falls more in line with the liberal feminist ideals of her Hillary Clinton-loving Good Wife-turned-Good Fight hero, Diane Lockhart.

“I can play people with whom I drastically disagree,” she assured, laughing. “The [S.N.L.] sketches have been unbelievable all through the election, and the post-election. So yeah, we could have a revolving door of people playing the cabinet members and all.” (We agree.)

Speaking with* Vanity Fair,* Baranski said that her beloved Diane is equally displeased with today’s political climate. “She would be outraged,” for instance, at Elizabeth Warren being silenced February 7 during Jeff Sessions’s confirmation hearing. But the veteran actress also noted the bright side to that dilemma: “I don’t think anyone can shut up Elizabeth Warren,” she said. “She’s actually getting a tremendous amount of publicity from this, and her voice will be louder than ever because of it. She won’t be silenced. Nor are women going to be silenced.”

Coincidentally, gender equality and censorship are two of the many issues parsed on The Good Fight. The new CBS All Access series from Robert and Michelle King premieres Sunday, February 19, and opens with Diane watching Trump’s inauguration.

“She’s—what’s the British word?—gobsmacked,” Baranski said of Diane’s reaction. “Robert King was very specific about how he wanted me to play it. He kept saying, ‘You’re stunned. Now go ahead, open your mouth. You’re stunned, Christine—open your mouth even wider.” This back-and-forth continued until Baranski felt she was going too far: “I thought, ‘Oh, this is too broad.’ [But] I must tell you, as I was watching many of the press conferences, I was like [that]. I think a lot of people will relate to this gobsmacked look.”

So we know how Diane feels going in—but the Kings are excited to show how various other characters respond to a Trump presidency in their courtroom drama.

“I do think what has happened culturally is what was up is now down, and what was down is now up—especially in a show about the law,” Robert said at the premiere. “So much of the fighting that is to come will be in the area of law. . . . It’s the front lines of whatever fight is to come.”

Just don’t expect The Good Fight to become an activist’s soapbox. Its roster does include characters who voted for Trump, and Michelle said that its writers always tried “to give as much intelligence to any argument on either side.” So if Trump were to shoot out an angry tweet about the anticipated spinoff, “it would be in a bundle of, ‘Look at what liberal TV is doing,’ or something like that,” Robert said. “[Our] show doesn’t lend itself to activism, because it doesn’t always come down on one side.”

The showrunners are, however, down on one side with regard to a prospective Baranski-as-DeVos: Michelle called the idea “smart,” while Robert “can’t wait” to see how it would look.