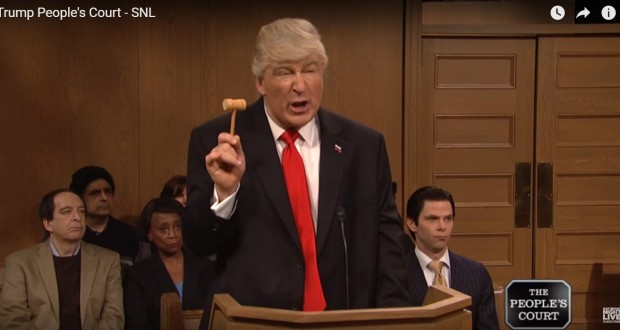 Baldwin, who again played Trump, brought in a bigger rating than the real thing. When Trump hosted the show as a presidential candidate in November 2015, the episode brought in a 6.6 overnight rating.

To calculate overnight ratings, Nielsen takes the percentage of households watching in 56 US markets and comes up with an average — in this case, the 7.2 means that 7.2% of households in these 56 markets tuned into the show Saturday night. Overnight ratings are preliminary numbers, and are subject to change as final viewership figures are calculated.

Saturday’s episode gave Baldwin’s Trump his day in court over his travel ban, which has been blocked by federal courts. The twist? It was “The People’s Court.”

Trump has attacked the series and Baldwin’s impersonation on Twitter throughout the season saying that the actor’s “portrayal stinks” and that it’s “time to retire the boring and unfunny show.”

But the show is actually in the midst of a viewership revival this season, its 42nd.

“SNL” is averaging 7.4 million viewers an episode, according to NBC. Add in those who watch within a week and that number jumps to 10.6 million, the show’s biggest audience in 22 years.