Paul McCartney, Ringo Starr Reunite to Record Together in Studio

Shares
Former Beatles bandmates Paul McCartney and Ringo Starr reunited in the studio this weekend to record new music together, the drummer revealed on social media. 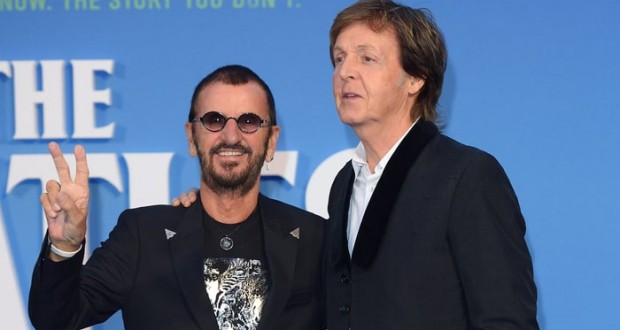 Former Beatles bandmates Paul McCartney and Ringo Starr reunited in the studio this weekend to record new music together, Joinfo.com reports with reference to the Rolling Stone magazine.

“Thanks for coming over and playing great bass. I love you man,” drummer tells Beatles bandmate.

“Thanks for coming over and playing Great bass. I love you man peace and love,” Starr wrote alongside a photo of him and McCartney in the studio.

Thanks for coming over man and playing Great bass. I love you man peace and love. ✌️☮ pic.twitter.com/Z5kpyLLlkO

Starr also tweeted a photo of him, McCartney and Eagles guitarist Joe Walsh, Starr’s brother-in-law, from the same studio session. “And look out Joe W. came out to play what a day I’m having,” Starr tweeted.

The recording session came just days after McCartney, Starr and Walsh, along with Tom Hanks and Dave Grohl, were all spotted dining together in Santa Monica.

Starr is currently in the studio working on the follow-up to 2015’s Postcards From Paradise. He and McCartney, who inducted Starr into the Rock and Roll Hall of Fame in 2015, last collaborated on the drummer’s 2010 LP Y Not, with McCartney singing on “Walk With You” and providing bass on “Peace Dream.”

In July 2016, Starr spoke to Rolling Stone about hitting the studio with artists like Van Dyke Parks, Richard Marx, Glen Ballard and Dave Stewart for his new LP.

“The way I’ve been working over the last several years is that I do sort of a rhythm-pattern synth track. And then I play drums and go, ‘Oh, there’s a verse. Oh, that sounds like a chorus,'” Starr said. “And then I call writers in and say, ‘Let’s write something to that!'” 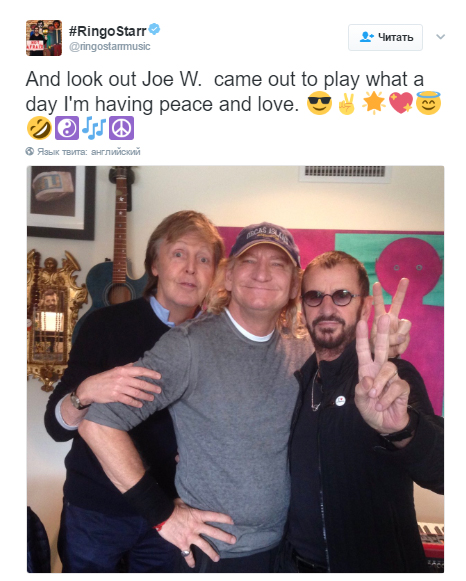