Shares
Less than two weeks after dropping her new single “Chained to the Rhythm,” Katy Perry has unleashed the video for the track. 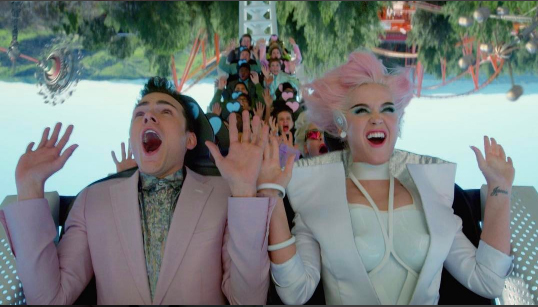 Katy Perry had been teasing the video for the last two days on social media, posting various images that seemed unrelated, including a hamster running on a wheel and a rocket ship launching into space, Joinfo.com reports with reference to EW.

Admission is “free” See you next Tuesday… #chainedtotherhythm

In actuality, those photos are from the video, which puts Perry in an amusement park right out of 1950s science-fiction, with rides playing with the notion of the American dream, clean drinking water, and the nuclear family.

“Chained to the Rhythm,” which features a verse from Bob Marley’s grandson Skip, is the singer’s first original song in more than two years, with the exception of “Rise,” the theme song for last summer’s Olympics.

On the first day of its release, “Chained to the Rhythm” was streamed 3,062,293 times on Spotify, setting the record for the most first-day streams for a single track by a female artist. Then, Perry offered a politically charged performance of the song at the Grammys.

Watch the new music video below.