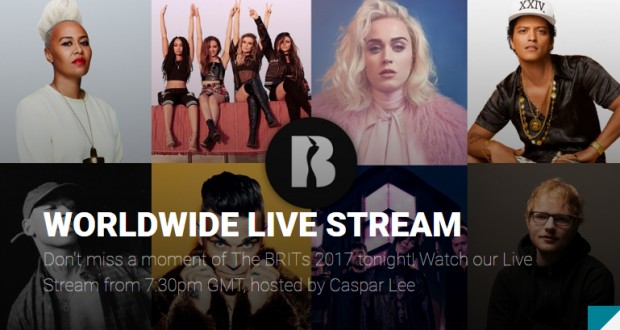 The 2017 BRIT Awards are live-streaming in the YouTube video below. The ceremony, hosted at London’s O2 Arena, includes performances by Katy Perry, Bruno Mars, Ed Sheeran, the 1975, Emeli Sandé and more, along with a tribute to the late George Michael, according to the Rolling Stone magazine.

David Bowie, the 1975 and Rihanna each earned multiple nominations at the event, which honors music related both in the U.K. and worldwide. Little Mix and Mercury Prize-winning grime artist Skepta lead the nominees with three nods apiece.

Bowie’s Blackstar and the 1975’s I Like It When You Sleep for You Are Beautiful Yet so Unaware of It are both nominated for British Album of the Year, alongside Skepta’s Konnichiwa, Michael Kiwanuka’s Love & Hate and Kano’s Made in the Manor. Bowie, who was honored at last year’s ceremony in a tribute featuring Lorde’s version of “Life on Mars,” is also nominated for British Male Solo Artist.

Radiohead are nominated in the British Group category against the 1975, Bastille, Biffy Clyro and Little Mix.
A full nominee list is available at the Brit Awards website.