Shares
PricewaterhouseCoopers, the firm responsible for organising the envelopes announcing the Oscars winners, have apologised for the mix up over the Best Picture award. 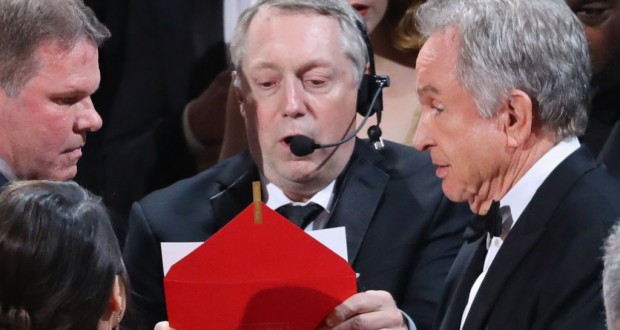 Confusion struck the Dolby Theatre in LA on Sunday night when Warren Beatty announced La La Land as the winner of the Best Picture award, only for the film’s crew to be interrupted half-way through their acceptance speech to be told it was, in fact, Moonlight that had actually won.

Now, after much discussion about how the mistake happened, Pricewaterhouse, who organise the Oscars ballots and the envelopes handed to presenters before they go on stage, have apologised, saying presenters Beatty and Faye Dunaway were given the wrong envelope, according to Metro.

The statement said: ‘We sincerely apologize to Moonlight, La La Land, Warren Beatty, Faye Dunaway, and Oscar viewers for the error that was made during the award announcement for Best Picture.

‘The presenters had mistakenly been given the wrong category envelope and when discovered, was immediately corrected.

‘We are currently investigating how this could have happened, and deeply regret that this occurred.’

A set of the winning envelopes are kept on either side of the stage so that Price Waterhouse accountants, Brian Cullinan and Martha Ruiz, can give them out to presenters as they go on stage.

La La Land’s producer Fred Berger was mid-way through thanking people when producer Jordan Horowitz interrupted him to say a mistake had been made and Barry Jenkins’ film Moonlight was the actual winner.

In the statement Price Waterhouse also praised the way the incident was handled. It said: ‘We appreciate the grace with which the nominees, the Academy, ABC, and Jimmy Kimmel handled the situation.’