Shares
Nearly 50 years after it was last seen, a 1968 Ford Mustang found in a Mexican junkyard has been confirmed to be one of two known to have been used in the filming of the Steve McQueen movie “Bullitt.” 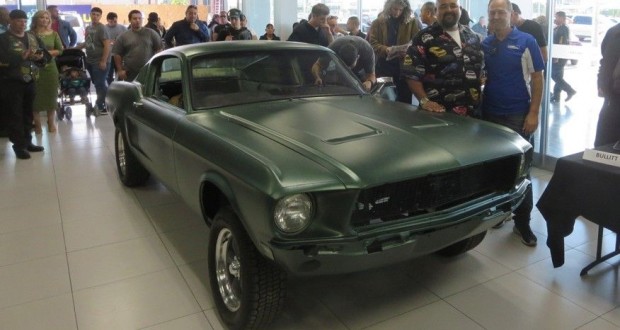 The car was discovered last year in Baja California Sur by a man named Hugo Sanchez, its then-white body rotting away and its original drivetrain long gone. Hollywood legend had it that the car, which was the film’s primary stunt car, had been sent to the junkyard shortly after filming was complete, but a couple of layers of paint sprayed on top of its iconic Highland Green suggest that it had lived several lives before finally ending up in one.

Sanchez brought it to a Mexicali custom car shop owned by his friend, Ralph Garcia, Jr., to have it turned into a clone of the similarly-famous “Eleanor” Mustang from the film “Gone in 60 Seconds,” but after the pair learned of its amazing history, their plans changed.

Marti Auto Works maintains the production database for every Ford built from 1967-2012. Its Marti Reports are a staple of the classic car world. They can tell you when a car was ordered, the color it was first painted, what options it came from the factory with, and the exact date it rolled off the assembly line. If you want make sure that Shelby Mustang you’re about to pay six figures for didn’t start its life as a straight-six stripper, one of these Marti Reports is the best way to find out.

Garcia was shocked when he got his.

Marti was familiar with the vehicle identification numbers (VINs) for the two Mustangs ordered by Warner Bros. for the making of the film. The other is privately owned today and hasn’t been shown publically in a quarter-century, while the one found in Mexico was long thought lost to history.

“It’s not the first time one of these old movie cars showed up in a junkyard, but it’s rare,” Marti says.

Garcia had already started repairing the car, which now wears a fresh coat of green paint and a replica license plate like the one in the film for effect. He and Sanchez, who co-own it, rolled it out to the sound of a mariachi band at the Mexicali Ford dealership before they shipped it to California, where Garcia lives. He tells Fox News that he’s going to start a full restoration with input from experts at Ford at a new shop he’s opening in Paramount, Calif., and has begun sourcing the parts he’ll need to do it.

Unsurprisingly, Garcia says they’ve been contacted with offers to buy the car as-is, but they’re keeping it for now. It’s hard to pin down the car’s value at this early stage, but McQueen-connected vehicles often sell for millions at auction, and a frenzy for all things “Bullitt” should be in full swing by next year, the 50th anniversary of the film’s debut.

Ford is rumored to be working on a new special edition Mustang Bullitt like those it introduced in 2001 and 2008, and there’s also the mystery of the whereabouts of the other movie car, and whether or not it will surface to celebrate. That is assuming there’s only one.

A stuntman who worked on the film’s epic chase scene, Loren Janes, has been quoted as saying that there were actually three identical cars used during production. The 85-year-old could not be reached for this story, but his claim remains undocumented. Marti has scoured his records for another car that might fit the bill, but has come up empty.

That’s not to say one’s not out there sitting in a garage, or a dusty Mexican lot waiting to be rediscovered, but if it is, it’ll probably take a lot of detective work and even more luck to find it.