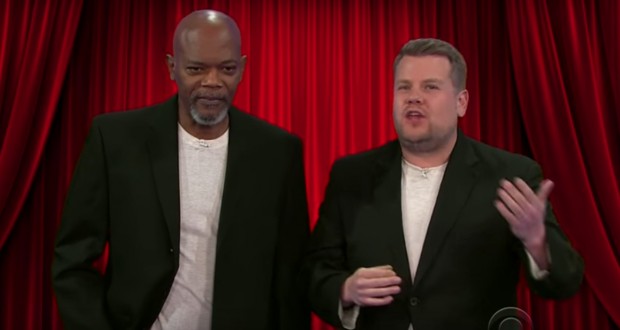 James Corden and Samuel L. Jackson reenacted Jackson’s extensive filmography on The Late Late Show on Wednesday. While Corden played everything from Yoda, a shark, a T-Rex to a snake, Jackson delivered countless iconic lines from his career, Joinfo.com reports wit reference to Rolling Stone.

The actors opened with Pulp Fiction. First, Corden stood in an ill-fitting wig while Jackson quoted scripture. Then, the backdrop behind the two men transformed and Corden played John Travolta’s character, Vincent Vega, instructing Jackson how to ask for a Quarter Pounder with cheese in Paris.

Cartoonish violence was the main connecting thread of the movie parodies. When reenacting Jackie Brown, for example, Jackson shot Corden. In Shaft, Jackson flogged him repeatedly and for The Negotiator, he held Corden at gunpoint. But in a snippet from Jurassic Park, Corden put on a T-Rex costume and chased Jackson off screen.

The pair acknowledged that the faux-violence was a part of the gag when they acted out part of Deep Blue Sea. “Nature can be lethal, but it doesn’t hold a candle to man,” Jackson said. “So we’re not going to fight anymore.” Moments later, Corden arrived in a shark costume and chomped on Jackson’s head.

Corden emerged in a King Kong outfit so that the two actors could promote Kong: Skull Island, which opens on Friday. “This movie looks incredible,” Corden’s King Kong said. “Go see it,” Jackson told the crowd. Then the two returned to the segment’s main theme, as King Kong bashed Jackson off the stage.