Emily Blunt and John Krasinski Will Star in ‘Quiet’ Thriller Together

Shares
Hollywood couple John Krasinski and Emily Blunt will co-star in their first feature film together. 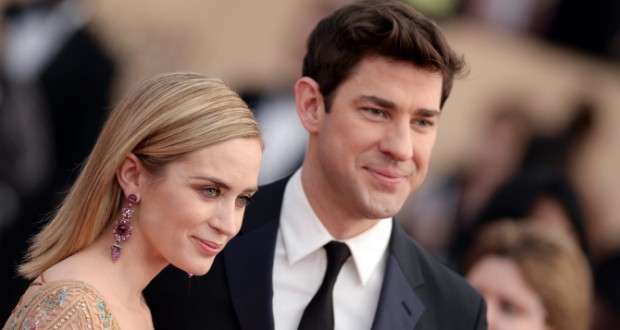 Krasinksi is set to write and direct the Paramount/Platinum Dunes supernatural thriller “A Quiet Place,” marking his third directorial effort and first for a major studio, and also star opposite his wife Blunt in the film, according to Variety.

Michael Bay will produce along with his partners Andrew Form and Brad Fuller of Platinum Dunes. Scott Beck and Bryan Woods wrote the earlier draft. Krasinski and his Sunday Night partner Allyson Seeger will serve as executive producers alongside Beck and Woods.

The film goes into production this fall.

Krasinski and Platinum Dunes last collaborated on Bay’s 2016 drama “13 Hours: The Secret Soldiers of Benghazi.” They’re also re-teaming on the upcoming Amazon series “Jack Ryan,” which Dunes is producing and Krasinski is toplining as the iconic CIA analyst. The show will premiere sometime in 2018.

During their time together in pre-production meetings on “Jack Ryan,” Krasinski expressed interest in doing a genre film in the vein of “The Purge” and “Ouija,” leading them to “The Quiet Place,” which the banner had recently acquired.

Krasinski next appears in Kathryn Bigelow’s upcoming movie about the Detroit Riots and was an executive producer on the Oscar-nominated drama “Manchester by the Sea.”

Sources say Krasinski and Blunt, who wed in 2010, prefer keeping their work and home lives separate, but neither wanted to pass up the film after reading the script.

Blunt is represented by CAA and The Artists Partnership, and Krasinski and Platinum Dunes are repped by WME.