Shares
The night after almost breaking Twitter with her announcement that she had Donald Trump’s tax returns, Rachel Maddow is opening up about the reveal and the response it has received. 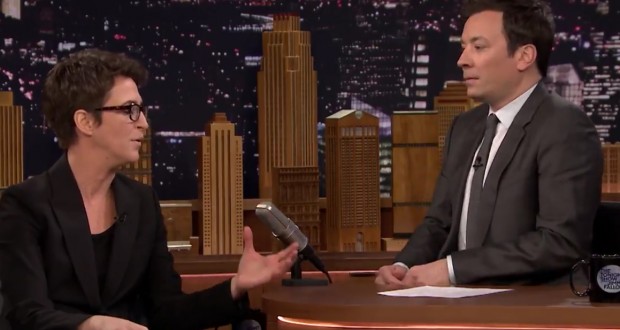 Appearing on Wednesday’s Tonight Show, Maddow discussed why her unveiling of the documents, which turned out to be from Trump’s 2005 return, was such a big deal, according to EW.

“I think the reason people were so excited is because it’s really weird that the president hasn’t released his financial information,” she told Jimmy Fallon. “It’s really odd, and there’s reasons to worry about it.”

Many critics said the reveal was over-hyped and underwhelming, partly because the show only had one year of the president’s tax returns. (The White House condemned the reveal in a statement that reads in part, “You know you are desperate for ratings when you are willing to violate the law to push a story about two pages of tax returns from over a decade ago.”)

Maddow continued, “So when we found out that we had one, it was like speaking to a group of people dying of thirst in the desert and we were like, ‘Behold, we have found a drop.’ ‘A drop? You have a drop!’”

Watch the clip below.

Tonight: Rachel Maddow compares her Trump tax return leak to “a drop of water” in the desert pic.twitter.com/RGDZt8wYhj