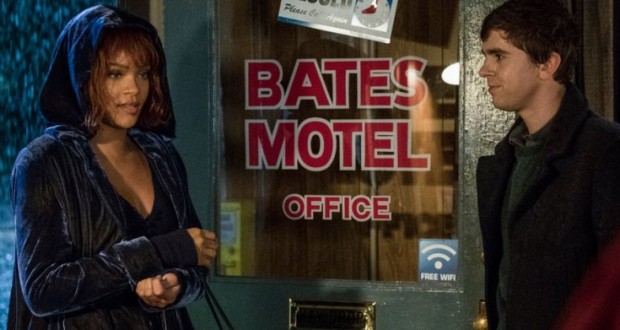 The modern take on Alfred Hitchcock’s classic novel has finally introduced Marion Crane (played by Rihanna) in the A&E series, Joinfo.com reports with reference to IBTimes.

Norman had pulled out his mother Norma’s body and preserved it in a dark chamber of his house in season 4 final episode. The once troubled teen is now a full-blown psycho and this is no good news for Marion who checked into his motel. In the show, Highmore’s character kills all the girls towards whom he is sexually attracted, assuming the girl will break his toxic relationship with his mother.

In the novel and the film, Marion fled with her boss’ money to have a happily ever after to live with her divorced boyfriend. And as fate had it, she bumped into the motel. Later Norman invited her for dinner and accidentally Marion overhears the fight between Norman and his mother.

She enters her room and tries to release her stress by taking a hot shower. However, a shadowy figure enters the bathroom and stabs her to death. Assuming that the mother committed the crime, Norman dumps the body in a swamp next to his house.

The show’s producers have kept the fate of Rihanna’s character a secret, but did reveal that they are trying to use a different version of the story.

“It’s been instinct to want to pull Marion Crane into 2017 and see what that character looks like. The character of a woman who’s in love with a guy and he’s not committing is … I’m sure Aristophanes wrote a play about that. [Laughs.] It’s been around a long time. There are different versions of it through history. We wanted to tell that story more from the inside of that experience for her. That was the instinct. And, at the same time, putting it in the world of Bates Motel and honoring Psycho,” Kerry Ehrin told Vulture.

Meanwhile, Carlton Cuse revealed that the end of the series will be amazing. He said: “Mother was dead and he’s around her body and in his full-blown psychosis. Our imagining of the ending was something we talked about early on. The specifics of how it played out got worked out this year, but the emotional intention was something that we knew very early. We were lucky. It’s amazing.”