Shares
For a plane crash sequence in “The Mummy,” Tom Cruise did 64 takes in zero gravity. 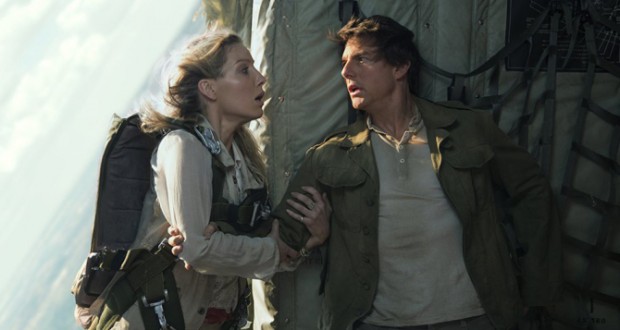 The sequence took two days to shoot and four high-altitude flights, the filmmakers said during a trailer presentation on Wednesday at CinemaCon, according to Variety.

“There was a lot of barfing,” said Alex Kurtzman, the film’s writer and director.

Tom Cruise was offered the option to do the scene on a sound stage, but he insisted on filming the sequence in zero gravity, believing it was important that audiences got the most realistic experience possible.

“He did not barf,” said co-star Annabelle Wallis at the Universal Pictures presentation, who said much of the 64-person crew became sick to their stomachs. Wallis also held down her lunch, but credited Cruise with being a gentleman.

“I was happy to have Tom on hand to hold back the hair, if needed,” Wallis said.

Jake Johnson, who plays Cruise’s sidekick in the film, said the star pressured actors to do their own stunts. That led to a few scrapes and bruises.

“We jump off buildings … and Tom really does it all,” said Johnson. “My character dies. I almost died.”

It’s not Cruise’s first death-defying stunt. For the “Mission: Impossible” series, the actor has strapped himself to the side of a plane and scaled the Burj Khalifa, the tallest building in the world.

Watch a featurette of the stunt:

Watch also the official trailer for ‘The Mummy’: