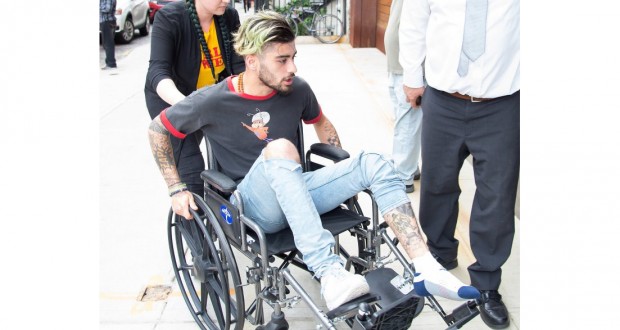 The 24-year-old was wheeled in by a friend and he looked in good spirits as he passed photographers waiting outside the building. It’s not known yet how he managed to hurt himself, but whatever he’s done is painful enough that he can’t weight bear, according to Metro.

Did he drop something heavy on it? Has he got an ingrown toenail? Our money’s on it being down to an upturned plug.

His representative said: ‘Zayn has injured his foot but is doing well and will be okay.’

But it didn’t stop him from heading over to Gigi’s for the day. Nothing can get in the way of true love, not even a mangled foot, it seems.

Fans are pretty concerned for the singer after his accident, taking to his Instagram to tell him to ‘get well soon’ and querying what the heck happened.

Zayn and Gigi shared some loved up snaps from the model’s 22nd birthday, with a massive pink cake given to her by her boyfriend.

Zayn even went as far as to gush she is his ‘everything’.