Home / Entertainment / Ellen, Nicole Kidman, and Giada De Laurentiis cook together, but no one has any fun

Ellen, Nicole Kidman, and Giada De Laurentiis cook together, but no one has any fun

Shares
Cooking segments on talk shows are always a bit rushed and awkward, but this one takes the cake for being the most uncomfortable. 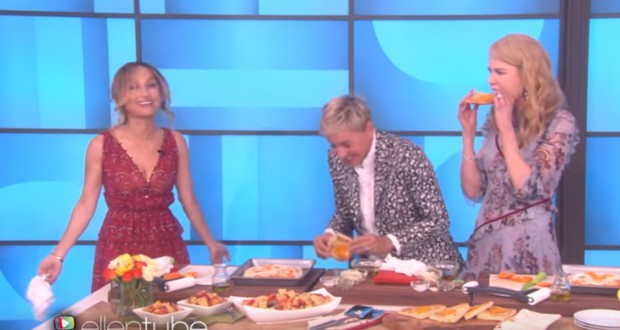 the cake for being the most uncomfortable.

Ellen Degeneres roped guest Nicole Kidman into joining her in a cooking segment with Food Network Stars judge and Italian chef extraordinaire Giada De Laurentiis, and the segment doesn’t exactly goes as planned, according to Mashable.

While De Laurentiis tries to teach Ellen and Kidman how to make some delicious arancini and focaccia bread, the two fool around, interrupt each other, and overall derail the segment to Giada’s annoyance.

Then, Ellen and Kidman criticize the focaccia for being “tough,” and Kidman literally takes a piece of chewed bread out of her mouth. At one point, De Laurentiis even says, “Why do I even do a cooking segment? I don’t even know why I bother!”

Everyone’s uncomfortable, nothing gets done, and generally, it doesn’t look like any of them are having any fun. Nicole Kidman looks like she would rather be doing anything else than this cooking segment. Even Ellen’s producer doesn’t know what’s going on.

Watch the segment below: