Shares
Melissa McCarthy returned to Saturday Night Live as host this weekend for the fifth time — and she also reprised her fan-favorite impersonation of White House press secretary Sean Spicer to poke fun at the recent firing of FBI director James Comey and Spicer's alleged hiding behind a bush during the ensuing press conference. 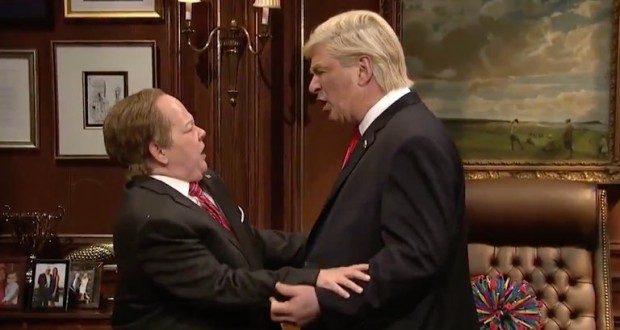 Aidy Bryant stepped to the press podium as Sarah Huckabee Sanders, Spicer’s stand-in this week, where she stated she did not know where Spicer was. A reporter then noted that he was “hiding in the bushes” outside the window — and there was Melissa McCarthy, peering through the glass, according to Hollywood Reporter.

Before the press conference could continue under Bryant, McCarthy crashed through the window, blasting the press pool with a fire extinguisher, to take over the conference.

First, she was asked about Trump’s mental state. “If he’s crazy, he’s crazy like a fox with mental problems,” McCarthy replied.

A reporter from the pool then asked McCarthy about the hot topic: Russian collusion. “Let me just put this whole Russian thing to bed once and for all: Trump is innocent,” Spicer replied. “How do I know? He told me so. He hired lawyers to agree with him.”

When words weren’t enough, McCarthy turned to a hand-painted a Russian nesting doll she had onhand to explain the White House’s chain-of-command.

The first doll featured a painting of Trump. “He’s the biggest one and the most beautiful.” The next doll up was “James Comey,” painted as Jake the Dog from Cartoon Network’s Adventure Time, then “HIllary Clinton,” a painting of Malificent from Sleeping Beauty, and underneath was a drawing of Putin (“Oops,” McCarthy said quickly before tossing that doll aside), followed by “Steve Bannon,” a painting of Slimer from Ghostbusters.

When questions still prevailed, McCarthy gave up any tactical reasoning and instead picked up a pillar from the side of the stage and hurled it into the crowd. “Does that answer your question? I hope to God, I hope it killed her,” she yelled.

Finally, a reporter asked McCarthy’s Spicer if she thought Trump would fire her next. “He wouldn’t do that. He’s my friend,” McCarthy said, getting choked up.

She then took her mobile podium on the road, driving down the streets of New York City in tears. “I need to find Trump,” McCarthy yelled. “I swear I’ll talk better.”

Finally, she found Baldwin’s Trump playing with a toy at a golf resort in New Jersey. “They’re saying you’re going to fire me for Sarah,” McCarthy said.

“She doesn’t have your special spice,” Baldwin reassured her, tickling her belly and ruffling her hair. The two then embraced, kissed, and made up.

Watch the video below.