Shares
The mock interview touched on James Comey, Russia, and “priming the pump” in what functioned as a defeatist rundown of a surreal news week. 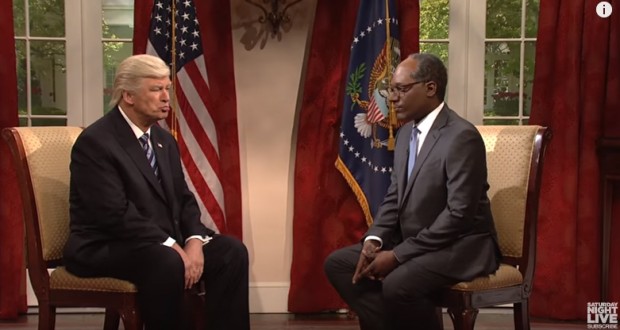 The live coast-to-coast episode of Saturday Night Live was one of the most anticipated episodes in of what’s been a big season for the show, with host Melissa McCarthy ascending to SNL’s “Five-Timers Club” and bringing back her brilliant Sean Spicer impersonation at the end of an eventful week for the White House and its beleaguered press secretary, Joinfo.com reports with reference to Vox.

The cold open featured Baldwin’s Trump being interviewed by SNL cast member Michael Che as NBC News anchor Lester Holt. Che’s Holt attempted to conduct a interview with the president about his decision to fire Comey in the middle of an investigation into the administration’s ties to Russia. The answer he received was predictably unexpected.

“I fired him because of Russia, I thought, he’s investigating Russia, I don’t like that, I should fire him,” said Baldwin’s Trump.

“So… did I get him? Is this all over?” asked Che’s Holt into his earpiece, acknowledging an answer that would, in any other context, be a smoking gun. Instead: “No, I didn’t? Nothing matters? Absolutely nothing matters anymore?”

Baldwin’s Trump then joked that he was not comparable to President Nixon, spoofing many comparisons of the president’s decision to Nixon’s decision to fire the Watergate special prosecutor.

“I am nothing like Nixon because I am not a crook,” he said, while flashing Nixon’s famous double peace sign.

The cold open interview also touched on other moments in an intense week for the president, like Trump referencing the phrase “priming the pump,” which Baldwin’s Trump promptly transformed into sexual innuendo.

“You have just earned yourself an Anderson Cooper eyeroll,” Holt said in response, accompanied by an inset shot of Alex Moffat’s Cooper doing exactly that.

Altogether, the sketch seemed to be a largely defeatist take on a tumultuous week that has left politicians largely divided over whether Trump crossed an ethical line, and left Trump himself defensive… or, the sketch suggests, perhaps not.

“Do you think I care about optics?” asked Baldwin’s indifferent Trump at the end of his SNL interview. “Look at me, I sit on every chair like it’s a toilet.”