Shares
Tom Cruise told the morning talk show in Australia today that the long-rumored Top Gun 2 will be heading to the cameras sometime “in the next year.” 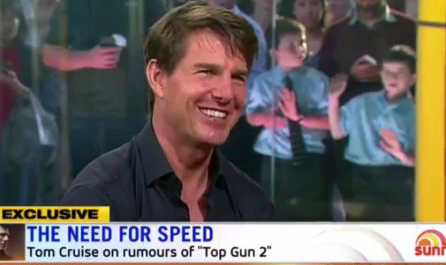 That admission comes a little over a year after Jerry Bruckheimer and the actor met on the Louisiana set of his Jack Reacher: Never Go Back to discuss plotline and fitting it into his schedule, according to Deadline.

In fact, Jerry Bruckheimer tweeted about it in January 2016 saying they were together to “discuss a little Top Gun.” They were, in fact, going over possible plot lines for the sequel.

Top Gun, of course, is the iconic 1986 action movie directed by Tony Scott who committed suicide in 2013. The new Top Gun would go through Paramount Pictures where the action star has done tons of films, including the MI franchise. Skydance, Jerry Bruckheimer Films and Paramount would all be involved in the picture.

Seven months ago, Cruise also teased it on the Graham Norton show saying that they (he and Bruckheimer) were discussing it and they were “trying” and “if we could figure it out, I’d love to work on it.” David Ellison of Skydance had also hinted about it as well.

Here is the latest from Cruise: