Home / Entertainment / ‘We salute you Ariana Grande!’ – star ‘demonstrated a level of compassion and maturity exceeding that of the American president’

‘We salute you Ariana Grande!’ – star ‘demonstrated a level of compassion and maturity exceeding that of the American president’

Shares
Ariana Grande returned to the city to pay tribute with an energetic, all-star concert featuring Justin Bieber, Katy Perry and Liam Gallagher two weeks after a suicide bombing killed 22 of her fans and injured dozens of others in Manchester, England. 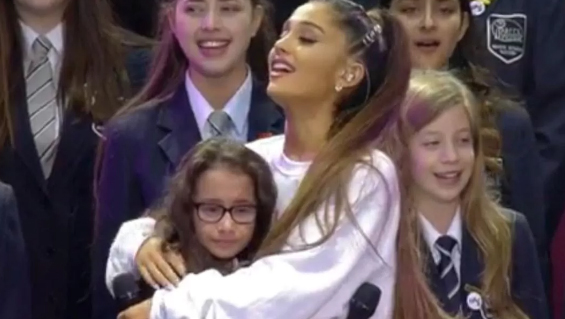 Grande was emotional and teary-eyed throughout the One Love Manchester concert Sunday, which the British Red Cross said it raised more than £10 million ($13 million) for the We Love Manchester Emergency Fund, created for those affected by the attack at Grande’s May 22 show, according to The Telegraph.

She closed the three-hour-plus event with a cover of “Over the Rainbow,” crying onstage at the song’s end as the audience cheered her on.

Reaction to Grande’s performance and efforts in making the event happen were overwhelmingly positive.

Cheers to @ArianaGrande who at a youthful age has demonstrated a level of compassion and maturity exceeding that of the American president.

God bless you @ArianaGrande . And every single person involved. Such a beautiful, POWERFUL night. My love is with you!!! #OneLoveManchester — AllyBrooke Hernandez (@AllyBrooke) 4 июня 2017 г.

Thanks @ArianaGrande for being amazing!

Ariana Grande is doing more to fight ISIS than Trump could ever dream of doing: she’s refusing to be led by fear.#ManchesterLove — Charles Clymer (@cmclymer) 4 июня 2017 г.

I’m not sure if I know a single @ArianaGrande tune – but I LOVE her for what she’s done tonight in #Manchester
We’re all in this together!

We salute you, @ArianaGrande, and we salute your fans who attended your benefit concert today. Courage. Healing. The best of humanity. — Anne Frank Center (@AnneFrankCenter) 4 июня 2017 г.

Even Piers Morgan paid tribute to the star – and apologised for previously criticising her for not immediately visiting Manchester victims in hospital.

“Manchester, I love you with all of my heart,” Grande said before the performance, and just after singing “One Last Time” with Miley Cyrus, Pharrell and more of the show’s performers standing behind her in solidarity.

Gallagher, formerly of Oasis, earned loud cheers from the audience as he emerged in his home town in surprise form. He sang and offered encouraging words to the crowd, who held inspirational signs in their hands.

One of the most powerful moments was when the Parrs Wood High School Choir performed Grande’s “My Everything” with the singer. The 23-year-old pop star held the young lead performer’s hand, both with tears in their eyes, as the rest of the singers joined in.

I misjudged you, @ArianaGrande & I apologise.
You’re an admirable young woman & this is a magnificent night.
Respect.#OneLoveManchester pic.twitter.com/r4v6NQMr97

Perry also left a mark with her resilient performance: She sang a stripped down version of her hit, “Part of Me.” Backed by two singers and a guitarist, she delivered the song wearing all white, singing, “Throw your sticks and your stones, throw your bombs and your blows, but you’re not gonna break my soul.”

“I encourage you to choose love even when it’s difficult. Let no one take that away from you,” she said.

Bieber shared similar words onstage, even coming close to crying when he spoke about God and those who died at Grande’s show.

“(God) loves you and he’s here for you. I wanna take this moment to honor the people that were lost, that were taken,” he said. “To the families, we love you so much. … Everybody say, ‘We honor you, and we love you.'”

Coldplay were also a crowd favorite, performing well-known songs like “Viva La Vida” and “Fix You.”

Grande performed throughout the show, singing her hits from “Side to Side” to “Break Free.” She even collaborated with others onstage: She sang Fergie’s verse on the Black Eyed Peas hit, “Where Is the Love?” along with the group; she performed a duet with Cyrus; and she sang her debut song, “The Way,” with rapper Mac Miller.