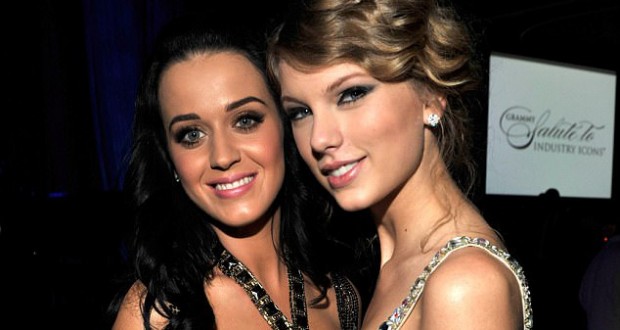 It was announced on Thursday that Taylor Swift would re-release her catalogue of music on Spotify, three years after boycotting the music sharing service. While fans rejoiced at the news, others were quick to spot the 27-year-old songstress’ choice to release her music from midnight on 9th June coincided with the release of her long-time nemesis Katy Perry’s fifth album, Witness, according to MailOnline.

Swarming Twitter, critics and fans weighed in on the scenario with many blasting Taylor for being ‘petty and immature’ while others lauded the move – made shortly after Katy insisted the songstress was trying to ‘assassinate her character’.

On Thursday, June 8th Taylor Swift’s management announced via Twitter that she was releasing her entire back catalogue of songs to all streaming services at midnight, having previously launched a smear campaign against the service.

The move appeared to be considered contrived by many due to the high-profile release scheduled for the slot, for Katy’s album Witness was first announced nearly a year ago before running a promotional collaboration with Spotify in February.

Fans of Taylor and Katy, know as Swiftys and KatyCats respectively, were quick to comment on the shock move as Twitter was immediately inundated with stunned reactions from fans – both positive and negative.

The sceptics of the row, penned: ‘I aspire to be the same level of petty taylor swift is rereleasing her music on spotify the day witness is released… Taylor Swift would put her music back on Spotify the day Katy Perry releases music… 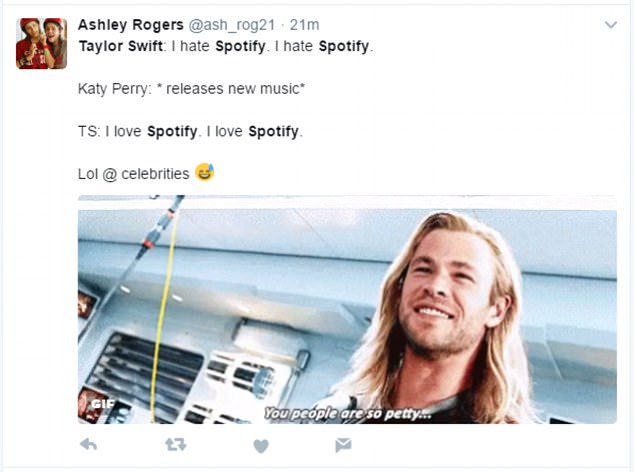 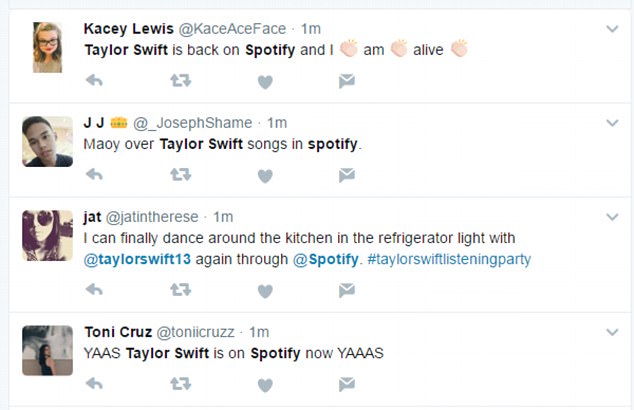 ‘And the winner of the @katyperry vs @taylorswift13 battle is… Spotify… I guess We Are Never Ever Getting Back Together wasn’t about Taylor Swift’s breakup with Spotify….’

‘Seeing @taylorswift13 back on Spotify the day @katyperry’s new album comes out is the most immature thing you can do as an ADULT #growup… so taylor swift is back on spotify just when katy perry releases her new album… hmm’.

The positive messages were also coming in thick and fast however: ‘Taylor Swift is back on Spotify and I am alive…I can finally dance around the kitchen in the refrigerator light with @taylorswift13 again through Spotify… #

Once again weighing in on the famous row, Katy recently remained insistent that her old friend should be first to apologise, and believes she was wrong to document their fallout so publicly.

She told NME:  ‘I wish that I could turn the other cheek every single time, but I’m also not a pushover, you know? Especially when someone tries to assassinate my character with little girls [her fans]. That’s so messed up!’

In her announcement on Thursday afternoon, Taylor’s team tweeted out a red-tinted image of Taylor along with the caption ‘In celebration of selling over 10 million albums worldwide and the RIAA’s 100 million song certification announcement, Taylor wants to thank her fans by making her entire back catalog available to all streaming services tonight at midnight.’

Taylor’s initial withdrawal from the streaming service came in 2014 when the star, then one of Spotify’s most streamed artists, refused to release her 2012 album Red on Spotify, critising the fact that artists receive just $0.006 and $0.0084 per song.

Penning a piece for the Wall Street Journal, she wrote: ‘Music is art, and art is important and rare. Important, rare things are valuable.

‘Valuable things should be paid for. It’s my opinion that music should not be free, and my prediction is that individual artists and their labels will someday decide what an album’s price point is. I hope they don’t underestimate themselves or undervalue their art.’

Katy has compounded the ongoing feud withTaylor, weeks after calling on the singer to settle a fallout sparked by an unlikely row over three backing dancers.

The pair have been embroiled in a bitter five-year dispute following claims Katy encouraged three dancers to withdraw from Swift’s 2012 Red world tour and join her on the road.