Shares
Meghan Markle appeared at Texas TV festival on Sunday. When asked if she hopes to marry boyfriend Prince Harry she silently smiled 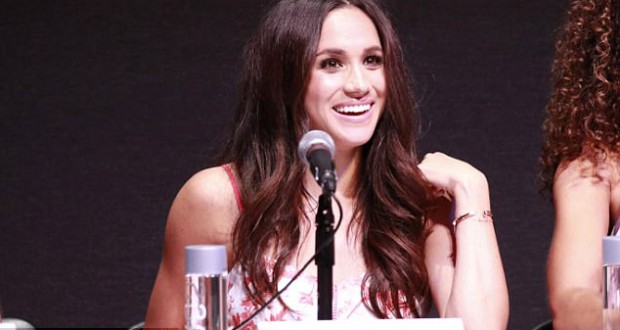 Prince Harry’s girlfriend Meghan Markle was hard at work Sunday, putting in a rare appearance alongside her Suits co-stars at a television festival, according to Daily Mail.

Dressed in a delicate cream dress with a red floral print, the 35-year-old smiled and waved to fans as she took to the stage for a script reading at the Paramount Theater in Austin, Texas.

And when asked if she hoped to marry boyfriend Prince Harry in Austin today, Markle smiled but said nothing.

Markle, 35, was back at the airport just 24 hours after touching down in Texas for the ATX Television Festival.

Having stolen the show in a red and white floral Club Monaco dress during a panel discussion Sunday morning, the dainty actress changed into a pair of pink linen shorts with a trendy paper bag waist for her flight back to Toronto.

Joining her on the plane was co-star Sarah Rafferty, 45, who also shared a stage with Markle during their public appearance.

But the actress declined interviews as she made her way inside for the reading and panel discussion – sneaking into the venue via a back entrance shortly before call time.

She also arrived alone, having stayed in a different hotel to her colleagues, who all opted to stay in the city center.

By contrast, Harry’s girl opted for a quiet $259-a-night boutique property called The Archer, located in the Austin suburbs.

The glamorous star did join her colleagues, including on-screen love interest Patrick J. Adams, 35, for lunch after the performance and was seen heading into La Condesa – a ‘contemporary’ Mexican restaurant that touts its ‘vast tequila selection’ and ‘sophisticated setting’.

Flanked on stage by Gina Torres, 48, and Suits creator Aaron Korsch, 50, the pretty brunette spent much of her time looking down at her script.

But the actress blushed and laughed along with the cheering audience when co-star Rick Hoffman, 46, teased her by suggesting doing part of the script reading in a British accent, in an apparent reference to Prince Harry.

During the panel discussion that followed the script reading, the actress described her cast mates as being like ‘family’.

‘We were in a group email the other day and I was saying we’d all lived in the same corporate housing so on top of working together we were living together which makes a whole different dynamic, I think. We just became this whole family right out the gate,’ she said.

The stunner, who spoke less frequently than her fellow thespians, did answer one question that touched on her favorite theme of women’s rights, describing her character as a ‘role model’ thanks to her career progress.

‘I am so happy… she’s worked so hard and I love that, as a role model, how she’s been crafted to balance it all and now have this place at the firm where she really knows her standing and her office isn’t just because she’s a good researcher, it’s because she’s an associate. She’s really earned that spot.’