Home / Entertainment / George Romero, Director of “Night of the Living Dead”, Dies At 77

George Romero, Director of “Night of the Living Dead”, Dies At 77

Shares
George A. Romero, director of the first zombie film “Night of the Living Dead” died on Sunday at the age of 77, according to Variety 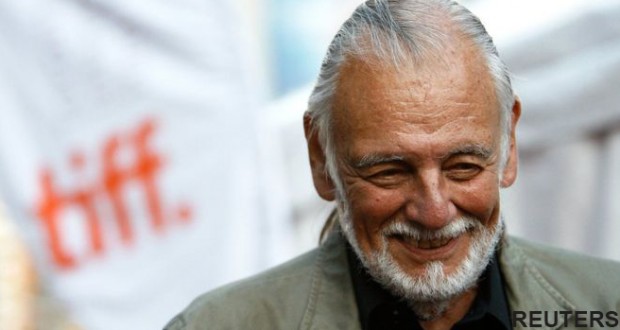 According to Variety, the director died in his sleep following a battle with lung cancer, according to a statement from his manager Chris Roe.

“Legendary filmmaker George A. Romero passed away on Sunday, July 16, listening to the score of ‘The Quiet Man,’ one of his all-time favorite films, with his wife, Suzanne Desrocher Romero, and daughter, Tina Romero at his side,” the statement said.

“He died peacefully in his sleep, following a brief but aggressive battle with lung cancer, and leaves behind a loving family, many friends, and a filmmaking legacy that has endured, and will continue to endure, the test of time.”

Made in Pittsburgh on a budget of just $114,000, “Night of the Living Dead” made $30 million and became a cult classic. Romero’s friends and associates in his Image Ten production company pooled their funds to make the film. Influenced by Richard Matheson’s novel “I Am Legend,” the black and white film about a group of people trapped in a Pennsylvania farmhouse who fall prey to a horde of the undead was said to be a critique of capitalism during the counterculture era.

After the release of the film was criticized for many violent scenes, and many film companies initially refused to show it, but after a while, the film was recognized as a classic of the genre and spawned a lot of sequels and remakes.

Due to the limited budget, the picture was shot in black and white and transferred to color only in 2005.

The legendary director is survived by his wife Suzanne and two children.