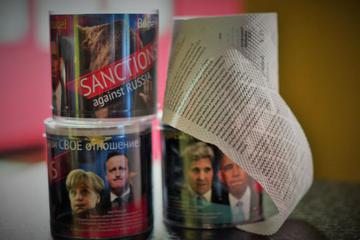 A creative response to the new sanctions against Russia was made by the Omsk residents. One of the Omsk advertisers began to produce toilet paper with the text of Western sanctions, which EU and the US imposed against Russia, Joinfo.com reports with reference to the local NGS Omsk news site.

As explained by one of the organizers of the movement “Our answer” Kirill Kolyasin, he and his colleagues want to support the government on foreign policy, as well as to show the Western leaders that “not only the leadership, but also citizens of the country regard sanctions with disfavour”.

The idea came to Kirill Kolyasin last year with the introduction of the first sanctions, but he failed to implement it.

After it came out that in June the Western countries will extend the embargo on certain groups of goods, the organizers have ordered 1000 toilet rolls with the text of the sanctions and began selling them through the Internet. They are sold in plastic package with pictures of the first persons of the European states and the United States at the price of RUB 990 for two rolls. The read text of sanctions in English is printed on the toilet paper.

According to Kirill Kolyasin, organizers also sent parcel with toilet paper to the Embassy of the United States, Germany and UK.